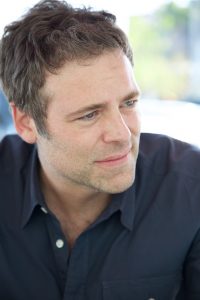 About Branden Frankel:
Branden Frankel is one of those who wanders and is, at least sometimes, lost. From philosophy, to music production, the practice of law, teaching, and raising a kid, he has dipped a figurative toe into many a metaphorical body of water. At 34, after divorce and a career change, Branden began writing fiction, finding his second passion — fatherhood being the first.
He lives in Los Angeles, CA with his daughter, Lilah, and Steve, their shockingly aggressive betta fish.

What inspires you to write?
I began writing fiction as a therapeutic outlet during a particularly difficult point in my life, and I found that I was actually pretty good at it. When I’m writing, I get to visit a world of my making; I get to watch the story unfold.

Tell us about your writing process.
My books start with a very broad concept. I’ve tried doing some general outlining, but, as the old saying goes, no battle plan survives the first shot fired. At least, that’s true with me. In some ways, writing for me is like solving a puzzle, only I create the pieces as well as place them.
<p>I have done some character sketches beforehand, which has been somewhat helpful, but they tend to react in unexpected ways when I place barriers in front of them.

What advice would you give other writers?
When writing my first book, I approached the first draft in a painstaking manner, not wanting anything I wrote to be less than perfect. I’m not sure if that made the finished product better (or possibly worse) than it would’ve been otherwise, but it turned a process that might’ve taken a few months into one that took about two years. I just finished a draft of my second book, and I blazed through it without regard for soaring prose or clever turns of phrase. It took me about three months. There is likely more work necessary to turn this draft into a finished product as a result, but it’s very easy to get discouraged with writing if a draft takes years.

How did you decide how to publish your books?
I queried some agents and got a few bites, but no takers. So I self-published. While there was a steep learning curve to that process, it’s nothing compared to learning to market. I’m still in the throes of that process.

What do you think about the future of book publishing?
The democratization of content distribution is a double-edged sword. On the one hand, I’ve sold thousands of copies of my first book. In the past, if I hadn’t gotten an agent or a foot in the door at a publishing house, that would have been the end of the road.
However, now that anyone can get content onto the Internet, the barriers to entry are negligible. The other side of that coin, though, is that there is so much content out there that it’s hard to break through the noise.
At least in the near future, I think things will remain much as they are. For self-published authors like myself, Amazon is the end-all-be-all.

What genres do you write?: Science Fiction, Noir