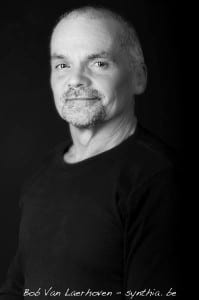 Born with sand between his toes

Bob van Laerhoven was born on August 8th 1953 in the sandy soil of Antwerp’s Kempen, where according to the cliché ‘pig-headed clodhoppers’ live. This perhaps explains why he started to write stories at a particularly young age. Some speak of science fiction, but Van Laerhoven hates the expression and prefers to speak of social fiction. A number of his stories were published in English, French, German, Spanish and Slovenian.

Van Laerhoven made his debut as a novelist in 1985 with Nachtspel – Night Game. He quickly became known for his ‘un-Flemish’ style: he writes colourful, kaleidoscopic novels in which the fate of the individual is closely related to broad social transformations. His style slowly evolved in his later novels to embrace more personal themes while continuing to branch out into the world at large. International flair has become his trademark.

Bob Van Laerhoven became a full-time author in 1991. The context of his stories isn’t invented behind his desk, rather it is rooted in personal experience. As a freelance travel writer, for example, he explored conflicts and trouble-spots across the globe from the early 1990s to 2005. Echoes of his experiences on the road also trickle through in his novels. Somalia, Liberia, Sudan, Gaza, Iran, Iraq, Myanmar… to name but a few.

During the Bosnian war, Van Laerhoven spent part of 1992 in the besieged city of Sarajevo. Three years later he was working for MSF – Doctors without frontiers – in the Bosnian city of Tuzla during the NATO bombings. At that moment the refugees arrived from the Muslim enclave of Srebrenica. Van Laerhoven was the first writer from the Low Countries to be given the chance to speak to the refugees. His conversations resulted in a travel book: Srebrenica. Getuigen van massamoord – Srebrenica. Testimony to a Mass Murder. The book denounces the rape and torture of the Muslim population of this Bosnian-Serbian enclave and is based on first-hand testimonies. He also concludes that mass murders took place, an idea that was questioned at the time but later proven accurate.

All these experiences contribute to Bob Van Laerhoven’s rich and commendable oeuvre, an oeuvre that typifies him as the versatile author of novels, travel stories, books for young adults, theatre pieces, biographies, poetry, non-fiction, letters, columns, articles… He is also a prize-winning author: in 2007 he won the Hercule Poirot Prize for best thriller of the year with his novel De Wraak van Baudelaire (Baudelaire’s Revenge)

What inspires you to write?
Being born in a Flemish working-class family which was down and out poor, I dreamed very young to become a poet. Fate has taken another direction and made me into an epic novelist who has published more than 30 books in The Netherlands and Flanders and who’s very recently published in the States by Pegasus Books.I have thought about so many reasons, but I really can’t fully explain the urge to write. The world is such a sad place, humankind is such a mixed up and dramatically painful species. Maybe, my writing tries to highlight the fact that parts of our brain seem to be working without “supervision”. Man’s thoughts wonder and ramble on like firecrackers in a firework show and literature tries to capture the sparks of that show before they tamp out….

Tell us about your writing process.
I write full time and I try to get a structure in my writing time but I fail hopelessly. The writing urge comes when it comes. For the rest of the day I work out and I tend to my three horses, which are my darlings and princesses anyway. Sometimes I write in the morning, sometimes at night. But I do write every day. It’s a necessity. I’m old-fashioned: no outlines, no whiteboard, no software, no character sketches: the process of writing itself gives everything in a natural fashion…

What advice would you give other writers?
After having published more than 30 books, my – but this is personal – way of writing is: get to the end of the story as quickly as possible. Write-write-write…And then you begin to chisell your material as a sculptor would do….I Always write at least three drafts before submitting but the first draft is go-go-go. Bad writing in the first draft, sloppy style? No problem: go. And afterwards comes the weeding, the fine-tuning, the most pleasant part of the writing process….

How did you decide how to publish your books?
I published my first book when I was 28 in 1981. Self-publishing in that era was out of the question, so it was perefectly normal that I went looking for a Publisher.

In this new era I’m beginning to think that being a hybrid author is the way to go: some books with a Publisher, some self-published as e-books.

What do you think about the future of book publishing?
Print and E-book will co-exist.