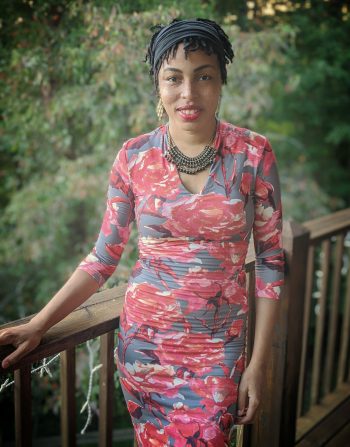 About Berneta L. Haynes:
Berneta L. Haynes was born and raised in Little Rock, Arkansas but has lived everywhere from Missouri, England, Iowa, Chicago, and Philadelphia. Her first novel, Landrien Moriset, debuted in 2015. An environmental attorney and founding editor of Waking Writer, Berneta lives in Atlanta with her partner and co-author, Lornett B. Vestal.

What inspires you to write?
I write because I rarely see marginalized, unconventional people of color centered in fantasy and science fiction genres, my two favorite genres. I recently co-wrote Eve and the Faders because I wanted to tell a story with an unconventional hero: a queer black woman from the working class. In some ways, Eve is a typical young woman, struggling to pay bills and dealing with a quarter-life crisis. She's queer and unsure about her relationship. On top of all that, she has special gifts that have put her on the radar of a little known government agency. For me, telling what amounts to a superhero origin story that centers and elevates a queer black woman is important. I want women like me to see themselves reflected in fiction.

What authors do you read when you aren’t writing?
I love so many books that it's difficult for me to pick favorite authors, but I'll try. I've read nearly every book by James Baldwin, and I can't even begin to capture how much I appreciate his voice. I'm a sucker for Kwame Dawes' fiction and wish he'd write more of it. I never get enough of Terry McMillan's work! I would be remiss if I didn't shout out N.K. Jemisin, too!

Tell us about your writing process.
My process is a bit technical in some ways but so much fun. I start with an outline of the core character, detailing the character's physical features, occupation and education, core personality traits and beliefs, and more. Then, I quickly summarize the character's internal and external conflicts. Only once I've done all that do I finally outline the general plot of the story and list secondary characters. I do all of this before I ever pen a word of the story. I'll be honest: this part before writing the story is the most invigorating part of the writing process!

For Fiction Writers: Do you listen (or talk to) to your characters?
I absolutely listen to and talk to them! Despite all my early outlining of the characters, they often guide me rather than the reverse. For instance, the ways my central character in Eve and the Faders changed from first draft to final published book is very telling. For starters, her name was initially Avia rather than Eve! But as I kept writing and revising, I tried not to mechanically make her character do anything. Instead, I listened to Eve's motivations and allowed her actions to flow from those motivations. I didn't think at the beginning that Eve would be willing to ever wield a gun and pull the trigger, but eventually she does exactly that and more. Part of me felt like an outside observer at times, just recording her behavior and actions. I know it often sounds weird or silly when writers talk about their characters in this way, but it's so real: our characters really have lives of their own, and we have to let them lead us.

What advice would you give other writers?
Never ever stop writing, and don't wait for anyone to validate your talent!

How did you decide how to publish your books?
I established an imprint to publish my books. I took steps to obtain an agent but realized that I simply needed to stop waiting for external validation. I needed to take action. I may one day publish traditionally, but I also believe it's important for authors to try the indie route…if for nothing else to learn the ins and outs of what it takes to get a book from draft to print.

What do you think about the future of book publishing?
I think there are positive things on the horizon. Indie publishing has gone through some significant changes in just a few short years as new platforms have developed to simplify the process. I think the future of book publishing requires a large indie market (indie authors and indie presses). Otherwise, we writers will find ourselves totally at the mercy of a few big publishing houses. The question is will we inevitably find ourselves at the mercy of a few big distributors, or has that ship already sailed?

What genres do you write?: fantasy, paranormal, science fiction, superhero