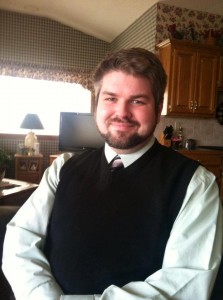 Author Bio:
Benjamin Smith is the author of Atlas, the first police procedural in a trilogy set in a dystopian San Francisco in the later half of the 21st Century. He is also a working playwright and author of the stage comedy June Cleaver: Sexual Deviant. He lives and works in and around his home town of Wichita, Kansas. In 2013, he became a father for the very first time. He is currently hard at work on the sequel to Atlas, as well as several stage plays and a stand alone novel based on the Grimm’s Fairy Tales. For those of you who happen upon these books, please remember to take the time to like or review them in support of this independent author’s efforts.

What inspires you to write?
I draw inspiration from everywhere I can. I like philosophy, quotationaries, art, music, attending social gatherings and community events to watch the people and catch snippets of their conversation. Life is very inspiring if you live it on a regular basis instead of sitting chained to a desk waiting for the next witty bit of dialogue to pop from the ether.

Tell us about your writing process.
To call writing a process is to betray it. I’m a person who “pre-writes” a lot at random with a main theme or sets of plot elements in mind. I then compile my writings until a story starts to take shape. It’s kind of like constructing a bell-curve with bits of writing coming together in the middle to make sense.

For Fiction Writers: Do you listen (or talk to) to your characters?
Writing is a socially acceptable form of Schizophrenia. The hard part about it, is that you time creating characters you truly love and admire and then you spend the rest of your life torturing them with unspeakable agony so that your readers can see them constantly struggle with the conflicts of life.

What advice would you give other writers?
Stop writing so that there’s less competition for me. No. I’ll admit, folks, if you’re an indie like me, you’re going to hit a wall that makes you think dirty selfish thoughts like that eventually. The chief rule of writing it this, do it cause you love it, not because you want to be loved for doing it. It’s not a race or a competition or a get-rich-quick scheme. Write stories you want to read and have fun doing it. All that other stuff isn’t as important as sitting down and having fun with a story.

How did you decide how to publish your books?
Well, I was rejected 200+ times over 2 years with not a single note telling me my book sucked. “We would love to, but…” was the common phrase. Basically, I got rejected because no publishers were in a position to “date” me because they were either already involved with other authors or they felt they were not in a position to commit to me on the level I needed. So, I self-published. Maybe some day they’ll start hitting me up for contracts. All I know is putting myself out there and getting reader feedback took a lot of pain out of all those form rejections and impersonal notes from New York Literary Agents and Publishers.

What do you think about the future of book publishing?
That readers and authors will become important again when it comes to determining who gets published. Snooki, your days are numbered.