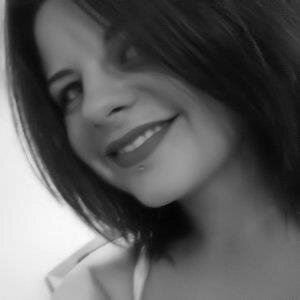 What inspires you to write?
I’m inspired by many things – most of my writing may comes from places I’ve traveled to – such as my first series, Eros’ Edge, which was inspired by my travel to Finland. I visited Finland over 10 times before finishing the series. Other times, a song or lyrics may inspire a certain chapter or scene in a novel. And of course, since my genre is romance – eye candy is inspiring too! In my head, my characters may take on the appearance of a celebrity or model. For example, in the love triangle in, The Sanctuary (Eros’ Edge, Book 1), the character Jude Wright was based off of Jeremy Piven’s character Ari Gold from Entourage.

Tell us about your writing process.
For the first two books in the series, Eros’ Edge, (The Sanctuary available now, The Society coming soon), I was a complete pantser! A song lyric and my own experience in Finland inspired the first chapter of book 1. As the chapters progressed though, I would get my inspiration during working out. I would blast some of my favorite tunes, hop on the treadmill and get lost in my head and the music. Once my workout was complete, I would go home and write – I usually had the entire next chapter or two planned out.

For the final book in the series, The Secret (which is my current work in progress), I became more of a planner. I had a general idea of how I wanted the book to proceed, what obstacles the characters would face and how they would develop. It wasn’t so much of an outline, but more of a list of bullet points I could refer to. The ending still isn’t planned out through – and I most likely will write that based on how the story unfolds.

For Fiction Writers: Do you listen (or talk to) to your characters?
I listen and talk to my characters all the time. I am always having an inner dialogue between myself and them to see how they would react and speak. It’s interesting that my characters are so much a part of my daydreaming that they have become part of my life.

What advice would you give other writers?
Never, ever give up. If you can dream it, do it! It may take a while to achieve your dream but you will make it one day, I promise. Writing is hard work, it can take years for a book to be produced from first draft to a final published copy. Don’t rush the process or you risk putting out a sub-par novel. You want your baby to shine – so edit, edit and edit some more. And when you finally think you are done, put it aside and start on your next project. Then go back to it after a while and read it again – not on your computer but on a paper copy. Edit it again. Have beta readers read it. Join writers forms and make writing friends. Hire and editor if you have to – they will spot flaws you couldn’t even see. Hire a professional book cover designer – the cover is the first impression readers have of your book and it is the most important. Every step matters, so take your time and never give up!

How did you decide how to publish your books?
I believed that my books were well written and marketable, but still needed to be polished by a professional. I decided that I would try and find an agent or a publisher to pick up my novels, and after I exhausted all my possibilities – only then would I self publish. Being a new author, I knew a publisher or agent would have the book’s best interests in mind because it’s their job to sell your book. I did research and made a list of agents and publishers for my genre and began submitting to them. I also pitched my novel on Twitter during #PitMad and #Pitchmas contests. Within a month, I was under consideration by several publishers and received an offer in less than 8 weeks. I am happy I went with my publisher and didn’t self publish because they were able to offer me professional editing and cover design – something that can be quite costly if you self publish and have to hire someone.

What do you think about the future of book publishing?
I don’t think the publishing industry is going to die anytime soon, and I don’t think we’ll ever see print books go away entirely. I think many of the mega authors (Stephen King, Nora Roberts, James Patterson) who have already established a name for themselves can self publish and still make a fortune without the Big 5. The big publishing houses will continue to churn out material that is sure to sell and the smaller ones will support the up and coming writers. As for self publishing, I think it’s a good avenue for those who want to get their book out there – but I also see a downside that many self published authors don’t take the time or money to really polish their stories. Eventually the market will turn to more ebooks than print, but publishers won’t go away anytime soon.