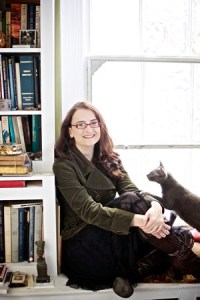 About Angela Quarles:
Her debut novel MUST LOVE BREECHES swept many unpublished romance contests, including the Grand Prize winner of Windy City’s Four Seasons contest in 2012. Angela loves history, folklore, and family history, and has been a hobby historian for twenty+ years. She decided to take her love of history and her active imagination and write stories of love and adventure for others to enjoy. When writing, she’s either at her desk in the finished attic of an historic home in beautiful and quirky Mobile, AL, or at her fave spot at the local Starbucks. When she isn’t writing, she’s either working at the local indie bookstore or enjoying the usual stuff like gardening, reading, hanging out, eating, drinking, chasing squirrels out of the walls, and creating the occasional knitted scarf.

Angela has had a varied career, including website programming and directing a small local history museum. She’s an admitted geek and is proud to be among the few but mighty Browncoats who watched Firefly the first night it aired. She was introduced to the wonderful world of science fiction by her father, by way of watching reruns of the original Star Trek in her tweens and later giving her a copy of Walter M. Miller Jr’s A Canticle for Leibowitz as a teenager. She hasn’t looked back since.

She has a B.A. in Anthropology and International Studies with a minor in German from Emory University, and a Masters in Heritage Preservation from Georgia State University. She was an exchange student to Finland in high school and studied abroad in Vienna one summer in college.

What inspires you to write?
Many things can. Sometimes it’s a title that pops into my head and the situation and characters flow from that, but more often it’s either a character or a situation that forms the initial nugget for the story.

Tell us about your writing process.
I call myself a Plantser–midway between a plotter and a pantser. I come up with my characters and their goals and motivations, and I try to come up with the major turning points, and then I have to just start feeling the rest of the story as I go. I use Scrivener to write and revise, and I love it. After I get the first draft done, then I pull out the usual arsenal that plotters use and analyze my story and do an outline, and put sticky notes up on a 3-Act Storyboard to make sure the plot is tight and that it works.

For Fiction Writers: Do you listen (or talk to) to your characters?
The only things I’ve actually said to characters is “You didn’t just say that!” But yeah, I listen to them all the time.

What advice would you give other writers?
Absorb other writers’ advice, but don’t take any one writer’s process as THE WAY to write. Try different methods out until you come up with your own process. Also, always strive to learn more and improve.

How did you decide how to publish your books?
I published a novelette first through a small press, but when it came to my debut novel, I landed an agent and shopped it with the major publishers. I ended up with two small press offers, but decided to turn them down and self-publish, as I felt my skill set was ideal for that path. In trying to decide, you need to be honest with yourself and analyze your strengths and weaknesses and choose the path that plays to your strengths.

What do you think about the future of book publishing?
I don’t know if anyone knows the future of the business, but I think reading books will always be around, no matter the format

What genres do you write?: romance