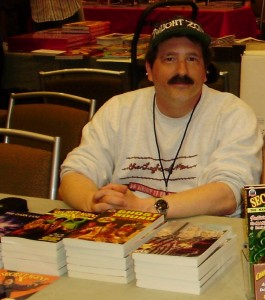 What inspires you to write?
Star Trek II: The Wrath of Khan turned me into a writer with one viewing! I went into the theater a reader and came out a writer as all of the machinery of writing were suddenly revealed to me while watching the film. I’ve been writing ever since though it is only in the last decade that I have been doing it full time for several publishers. Anything inspires me and I never know what will touch off the next tale.

Tell us about your writing process.
The journey of a tale begins, for me, with that one simple thing that just sticks in my mind: a character, an image, a scene, an incident. From there the tale grows organically. I let it simmer in the back of my brain until I’ve got enough to begin the writing process. I don’t outline. I let the tale find its way over the course of the first draft. Once that is complete, I look it over and the meaning of the tale reveals itself to me. Then I revise accordingly until I’m satisfied with the work. Then off it goes with fingers crossed.

For Fiction Writers: Do you listen (or talk to) to your characters?
I’ve been writing a lot of Sherlock Holmes stories of late and it has gotten to the point that this dynamic duo often have conversations in my head. Writing their interactions has become easier with each outing. Coming up with a dandy of a plot – ah, there’s the rub. Holmes does explain his reasoning to me, which is a big help. All I have to do is write down what he says. Spooky, but that’s how I roll.

What advice would you give other writers?
Read! Read! Read! Read! Everything you can get your hands on starting out. And don’t get locked into a specific genre. Read the classics, old pulp authors, today’s mainstream writers, indies – don’t be a snob. In the beginning, you are a sponge and need to read everything!

If you’re self-publishing, do it right. If your cover can hold its own against a pro cover, get a new one. If your prose doesn’t stack up to the competition, keep working. Publishing sub-par or still-amateur stuff will not help you. It won’t sell and your reputation as a writer will take the hit. These days everyone can be published so there’s no rush. Don’t throw it out there until it’s ready!

How did you decide how to publish your books?
Mainstream publishers wouldn’t touch me. Knowing I could write (award nominations and wins) yet not being able to get through the door lead me to smaller presses like Fight Card Books, Airship 27 and Radio Archives who all gave me the chance to show what I could do. Fight Card Books (an author collective) allowed me to self-publish under the Fight Card umbrella and with their assistance. Once I saw how easy it was and saw the $$ coming in, that was it for me. Self-publishing works for me.

What do you think about the future of book publishing?
Printed books are going to become luxury items much like the deluxe CD boxsets being offered today. I’m not happy about this as I’m a print guy. But I do read and enjoy ebooks as well. Still the writing is on the wall (or the screen in this case) and ebooks are here to stay. As a writer, ebooks have been a godsend. Earning money as an author is every writer’s dream and I’m doing that. Not much at the moment but the future looks bright. Legacy publishing is a thing of the past. These days, everyone gets a shot and the avalanche of material already out there is staggering. Stuff that wouldn’t get a second look from the “Big Guns” because it doesn’t read like James Patterson can be released to find an audience. It’s great! It means more work for the writer but it also means virtually unlimited choice for the reader and at every price point. What’s not to love? The future is bright and shiny!