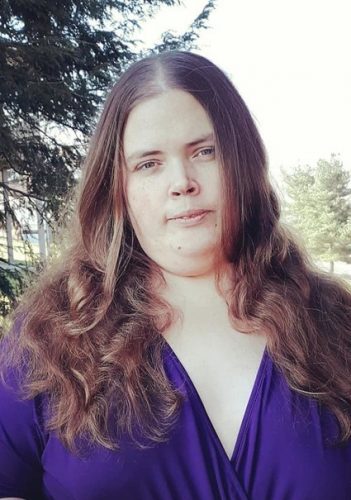 About Amanda M Lyons:
A longtime fan of horror and fantasy, Ms. Lyons writes character-driven novels that, while influenced by the dark and gothic, can also be heavily laced with fantasy, romance, history, and magic. Amanda M. Lyons has lived her whole life in rural Ohio, where she lives with her fiance and two children. She is the author of Wendy Won't Go: Collector's Edition, Eyes Like Blue Fire, Water Like Crimson Sorrow, Cool Green Waters, Other Dangers Part 1: Slipped Through, Other Dangers: This is How the World Ends, Sacrum Umbra: The Gothic Stories of Amanda M. Lyons, In Ventre Tuo: Tales of Madness and Gore, The Lesser Apocrypha, and The Hungry Season: Three Stories for Hungry Hearts. She is also a coauthor of Feral Hearts with authors Catt Dahman, Mark Woods, Jim Goforth, Edward P. Cardillo, and Michael Fisher and a contributing author to several anthologies.
Look for titles like Other Dangers: Further Down the Spiral, Vast Ocean/Vast Sea, Night is Falling, Hollow Black Corners of the Soul, Jodie, Thy Fearful Symmetry and others in the coming future.

What inspires you to write?
Just about everything is a source of inspiration really. I will say that for the most part, I do find that I'm working on fears and trauma from the past in some way with many things, but others can be simpler and based on random 'what-if' moments.

What authors do you read when you aren’t writing?
Stephen King, Clive Barker, Melanie Tem, Gary A. Braunbeck, Gary Jennings, Thomas Tryon, Michael McDowell, Mark Lawrence, Susan Simone, Michael Kanuckel, Kim Harrison, Caitlin Doughty, Joe Hill, Richard Laymon, Brian Keene, I could list so many more here but these are some of the big ones.

Tell us about your writing process.
Most of the time I'm a pantser when I write, having that great idea come forward and letting it simmer in my head a bit before I start writing any of it down. Typically an idea gets worked on gradually, developing as I go forward, even into a second or third draft. Some ideas are lucky enough to be thought of, written up, and released in fairly quick timing, but others might take years of work and on and off periods of inspiration. I usually type things up by pc or laptop but there are still times I might write things down in a notebook, particularly notes for something I'm working on.

For Fiction Writers: Do you listen (or talk to) to your characters?
No, not really. I'm not an author with that sort of interaction with my characters. I liken my method to that of being one of those old bards who write down what they're seeing and make a story out of it.

What advice would you give other writers?
Write and write, don't stop working on your ideas. A lot of us get disheartened or tell ourselves that we aren't good enough and set it aside for periods of time out of some need to punish ourselves for trying. The reality is that the more we write and the more we edit our work the stronger we get. When we stop, we just delay ourselves getting better and better at what we do. I should know, My first novel languished for 15 years before I risked submitting it and getting it published.

How did you decide how to publish your books?
I was indie only with my first book, switched to being with a small press for five years, and then went back to publishing the indie route after that. There isn't a perfect cut and dry method for any author. The best thing is for you to learn what's best for you by experience, that can mean some trial and error, but in the end, you can learn a lot about yourself and what you can do on any path. The biggest pitfalls are not trying to publish at all or getting ripped off by a vanity press- remember, you never have to pay anyone to publish your work. You may have to hire freelance editors, cover artists and formats for a good print copy if you go indie, however.

What do you think about the future of book publishing?
It's going to keep shifting and changing as it always has. It might become more indie, it might drift back toward traditional publishing a bit more, but in the end, there will always be a demand for stories and the storyteller.

What genres do you write?: Horror, gothic, fantasy, sci-fi, paranormal