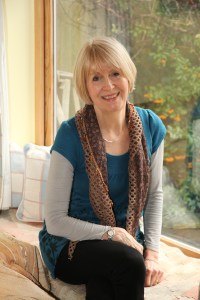 About Alex Johnson:
As well as being a beauty journalist, I write romance and historical novels. I’ve published my romance novels Run Away and the sequel The Perfume Muse on amazon kindle, and am hoping to go down the more traditional route with my historical novel The Hidden Village, set in wartime Holland.

What inspires you to write?
I’m always writing, whether it’s for work or for pleasure, however getting the balance right can be tricky. I’m lucky to work in the cosmetics and perfume industry and this is providing a great deal of inspiration for my characters, plot and setting. In researching my latest novel, The Perfume Muse, I took a trip to Grasse, the world’s perfume capital, where I was able to immerse myself in the history and scents and smells, which became the central theme of my writing.

In writing The Hidden Village I drew on my Dutch mother’s tales of surviving the Hunger Winter in WW2. As a family, we often visit Holland and one year we discovered a place in deep in the Nunspeet woods where a complete settlement of underground huts had been built to help Jews hide from the Germans. It was chilling, thrilling and for me, the perfect setting for my novel.

Tell us about your writing process.
I write my novels very differently to the way I write articles and reports for my job. I love the freedom I have to be myself and not stick to a rigid brief so I often just let the story flow and see where the characters take me. Research is important, and I will always try to do a lot of this before I write, but sometimes I get sidetracked if I find a particularly interesting source, event or place that I know will improve my writing.
I try to write little and often. In this way, the story is always circulating at the back of my mind, even when I’m not thinking about it. The worst thing is having a few days off as this leaves me feeling quite out of sorts.

For Fiction Writers: Do you listen (or talk to) to your characters?
I can’t say I talk to them! I grow fond of my characters and I guess I “listen” to them in so far as I let them have their say and wouldn’t dream of contradicting them. They can be frustrating and indecisive at times and I hope that by the end of the book they will have come to some kind of resolution, but I would hate it if they become complacent and lived “happily ever after”. Life just isn’t like that.

What advice would you give other writers?
Write!! I’m a member of several writers’ groups and so often people say they don’t have the time to write. Neither do I, but I make myself sit down at the beginning of the day, before anything gets in the way. Sometimes, I only manage to squeeze out a 100 words, but that’s OK. Do that every day and you’ve written 700 words in a week and 2800 in a month. Double that to 200 a day and you can see how your book will grow.

How did you decide how to publish your books?
I’ve gone down the route of self publishing on amazon. I first published Run Away, a novel about Julie, who faces the break-up of her marriage and her wayward teenage daughter leaving to go on a Gap Year, before she finds love with French perfumer Olivier. But not before Lisa, her daughter, goes missing. The novel has been on amazon since November 2012 and had moderate success -since then self-publishing has become brutally competitive with literally thousands upon thousands of new titles appearing each year.
I use twitter a lot and have just begun to engage with book bloggers and wish I’d had the sense (nerve?) to do so earlier. A lot of self published authors blog themselves and have Facebook pages -anything to raise your profile is good.

What do you think about the future of book publishing?
I’m really optimistic about it because I think that more people than ever before are reading and reading more. E-publishing has opened up the world to would-be authors and there are some really, really good ones out there who deserve to be traditionally published. I’d say if you find a self-published author you admire, do all you can to tell others about them by writing book reviews on amazon and Goodreads and promoting their work on social media.

What genres do you write?: Romance and historical