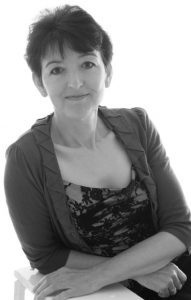 About AJ Waines:
AJ Waines has sold over 200,000 books worldwide and topped the UK and Australian Kindle Charts in 2015 with her number one bestseller, Girl on a Train. She was a Psychotherapist for fifteen years, during which time she worked with ex-offenders from high-security institutions, gaining a rare insight into criminal and abnormal psychology. AJ Waines is now a full-time novelist with publishing deals in France, Germany (Random House) and USA (audiobooks).

Her fourth novel, No Longer Safe, sold over 30,000 copies in the first month, in twelve countries worldwide. She has been featured in The Wall Street Journal and The Times and in 2016 was ranked in the Top 10 UK authors on Amazon KDP (Kindle Direct Publishing).

AJ Waines lives in Southampton, UK, with her husband.

What inspires you to write?
As a Psychotherapist, I’ve always been interested in how people ‘tick’. I see myself as the most private of ‘private detectives’ getting inside someone’s head and taking a good look around. It’s a very privileged position. Having worked with ex-convicts from high-security institutions I have developed considerable insight into motives and psychological disorders. Put that together with a love of words and imagery and you have a crime writer!

Tell us about your writing process.
tend to start with a single idea or ‘hook’ and I like to get a title early, so that I have a clean focus for the story. I used to wing it from the start – now, it’s safer to do quite an extensive outline of the whole plot, although I do like to leave flexibility.

For Fiction Writers: Do you listen (or talk to) to your characters?
I usually have a clear sense of who people are at the beginning and form a profile on paper, especially about motives and what drives the character. I love the way this then develops in its own way as the story unfolds. I ‘hear’ the characters speak in my head and see them move as if the story is on film. It’s pure escapism as I step into their world for hours on end.

What advice would you give other writers?
Read, read and read! Analyse the genre you love reading – explore in detail how writers ‘do it’, from opening each chapter to the twist at the end. Examine what works. Then have a go. Start with an incident, says Stephen King, and go from there.

How did you decide how to publish your books?
I have a foot in both traditional and non-traditional publishing camps. My Agent found publishers in France and Germany (Random House) for my first book and we decided to put them up on Amazon (WhiteGlove programme for Agented authors) in UK/US, to see how they would do on an independent platform. I’ve been astonished at how well my books seem to have done – they’re now being purchased in 13 countries worldwide (plus audiobooks) – and I went on to publish independently through Kindle and Createspace on Amazon.

What do you think about the future of book publishing?
Hard to say. I’m of the old school – I love holding a physical book – I don’t like the idea of a ‘losing’ all my books because an electronic device failed! Also, we look at screens all day.

I think the problem with ‘everyone’ publishing is that there are no gate-keepers for standards – I do believe that books need to be of a good quality. I also think that professional writers should get paid if someone reads their work – whether this is on an ereader, an audio book, traditional book or through a library. There is a lot of piracy about.