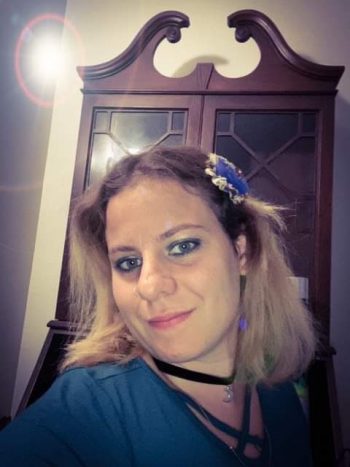 About A.R. Harlow:
A.R. Harlow is a small town author who moved to the city in the last year. When not writing books she is actively pursuing a degree in counseling. She also spends time chasing after a 5 year old who is determined to take over the world and two cats who are equally determined not to care. She enjoys spending quality time with her partner in their home near St. Louis. Things she will often be found doing is numerous, being a jack of all trades and master of none, she often reads, takes photographs, and rides on a motorcycle.

What inspires you to write?
I find inspiration from everywhere around me. It can be a fancy word from the dictionary one day, to a landmark the next, to a particular mood a certain song will put off while listening to music. Inspiration isn’t something that is dead or inanimate, set in stone, it often is this living source all around us. It can be in the way a late summer night feels, or how a piano is played, it can be the landmark you drive by every so often, or in the most innocent way a child can put something.

I draw heavily on my own experiences as inspiration, but I also rely on the accounts of others to make a compelling story.

I most often write what I want to read. I also spend a lot of time reading and wishing that my writing sounded like some of the phenomenal books I have read through the years.

Writing is sometimes not inspired though, sometimes it is done without wanting to write, even less with writing with inspiration. Writing often is a labor of getting one word after the other and no amount of inspiring images or vivid imagination will fill it. That is when writing is at its hardest—when no amount of imagery or words or even emotions of a song stir you to want to write and yet you still persist. Writing while inspired or being inspired to write is wonderful and it does happen, but there are also times when it doesn’t and it is a matter of one word after another when you haven’t felt inspired for months.

Tell us about your writing process.
My writing process probably looks messy. I would say, it is messy, as it does not follow a linear model or method.

Sometimes, my writing process is a simple as putting a pen to a piece of paper and writing as many pages as I can before my hand cramps.

Most often, I would say it is typing on a computer or phone app and rereading what I wrote before each writing session.

I have tried deep, full outlines with scene-by-scene play outs of what is going to happen and found I get stuck or bored with the process. Other times, it is a loose outline that says what key things should happen by these points, but not set in stone.

I find if I put too much of an outline I feel trapped by it, but too little of one and my character will be walking into a tavern in their birthday suit on a Monday morning.

I find that often what works best is to put on some instrumental music, write down on paper the title of the book and series, and make a chapter break down of what characters are in the chapter and what beats I would like to hit. Now, this outline is adjusted on the fly, sometimes disregarded entirely as the book takes on a life of its own.

I often use Microsoft Word, Scrivener, and Pages. But, I have been known to use napkins, emails to myself, text messages, and the back of a receipt before for an idea or potential plot point.

For Fiction Writers: Do you listen (or talk to) to your characters?
I do!

Sometimes, I wish they would shut up and other times I cannot get them to talk and reveal why we are stuck someplace.

What advice would you give other writers?
I would give other authors the advice not to give up no matter how hard it is sometimes. You have a story and you should tell it. It might take you only two months or it could take you twenty years, but your story is worth it.

Other advice I would give is to make sure you get a support team behind you. Friends, family, an author community, it is so rewarding to have people who understand cheering you on and also there to be a shoulder when things are not going well. My team has been a great support in the lull in my career and without them I would be lost.

And remember, there is no right or wrong way to write. Yes, some are easier then others, readers have preferences, but ultimately you have to write your way and be happy with what you are putting out there whether it’s published traditionally, indie, small press, or if you just share it for free, it is your story and it is worth it.

How did you decide how to publish your books?
I decided to self-publish my books because I wanted to be in control of all aspects of it and I did not want to wait months and get countless rejections. It gave me the options to do things my way, to hire my own cover designer and editor and formatter.

I would suggest to check our cover groups, editors, and formatters. I recommend that because you will want to scope out what you are looking for, for your own books. People have different tastes and there are many options for all the people mentioned before. You will want to find someone you mesh well with. There are some projects I use one editor for and others I will use someone else. The same for designers. Each one has a speciality and it is important to make sure you are finding one that will work well with your genre and goals for the book.

When hiring an editor, make sure to get a sample edit, but also know that the editor does not do all the work for you. You will generally be going through your book one last time at least after you get your book back.

What do you think about the future of book publishing?
I think it has a bright future, I definitely want to see more indie publishing happen and for indies to start making it big in some of the genres that they are not doing so well in right now.