You are here: Home / Children and Young Adult Books / INNOCENT by Callie James 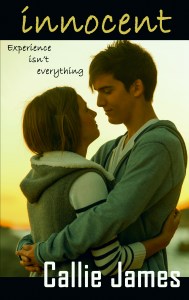 Will Moore has been Missy Jamison’s best friend for years, and until recently, she hadn’t considered going “there” with him for fear of losing the only relationship she trusts. But senior year is almost over and dating other people hasn’t worked out, not with Missy’s crazy home life constantly pushing her further into Will’s safer world, making her attraction to her BFF more difficult to ignore.

When a forgery incident at school lands Missy under house arrest and banned from spending time with Will, she’s unable to ignore her dysfunctional home life any longer. In a desperate attempt for self-preservation, Missy finds herself back with Will and this time things are different.

But the direct violation of her mother’s edict proves the perfect catalyst to push her pill-popping mother over the edge and Missy’s home life past the point of no return. Now her only chance for normalcy will require Missy to ask herself if staying silent for so many years was truly about protecting herself from her past, or more about protecting a mother who never protected her.

What Inspired You to Write Your Book?
Various experiences inspired this book, and it took a few friends to encourage me to write it. I knew when I finally decided to write this book that it would be dark, very dark, and I didn’t want it to be. That’s when I decided to make it a young adult romance–to help pull back some of the focus from this very dark subject.

How Did You Come up With Your Characters?
Where to begin. My husband tells me that Missy is very much ME. So I guess out of all of the characters I’ve written in 25 years, Missy is the one I can relate to the most. The hero, Will, had to have a very unique personality to be the hero I needed him to be in this story. He, like many of the characters in this story, resemble pieces of people I’ve known in my life, which is probably why readers have such a strong reaction to the book. They’re all very real.

Book Sample
Turning to Will, I wanted to disintegrate into the rain. My cheeks heated despite the cold. I couldn’t believe what I’d said aloud, much less that I’d said it to him in front of everyone. I had nowhere to go. Nowhere to escape without squeezing by the jackasses still gathered at the door.
Swallowing tears of humiliation, I pivoted quickly and stalked into the stormy night—the Stocktons’ extensive property—hoping to find a path in the darkness that would lead me to oblivion, or at least to my car. The property had to stretch forever because I just kept walking and walking with no end in sight. I could see very little through the rain and darkness and it felt like I was headed to the back of beyond, but I kept going, hopping over slick grass and cobblestone squares as fast as I could go without slipping on my ass.
“Would you wait the hell up?”
When I heard his shout behind me, I sped up, unable to see even a few feet in front of me as I walked farther from the house. I could walk off a cliff and not care right now. Anything felt better than continuing this doomed conversation.
He caught up to me and grabbed my hand, turning me to face him.
I wanted so badly to hit him just then. I imagined it clearly. Whack, right across the face. It couldn’t hurt as badly as this breaking heart he apparently wanted me to endure forever. I wanted to hate him for every memory with him in it. For beating up Jason Baumgardner in fourth grade when he hit me in the face with a baseball bat. For sitting next to me in homeroom that first day of freshman year when I knew no one would like me in a new school. For walking me home all those nights from Owen’s when he didn’t have to. For letting me adopt his stepdad. For deserting me weeks ago when I needed him most. For deserting me in a goddamn bathroom, no less.
“I have nothing more to say to you!” I yelled.
“I left last weekend,” he shouted as rain streamed down our faces, “because I wanted to stay.”
Was he joking? I couldn’t make out his features between the darkness and rain hitting my eyes. If it wasn’t for the light of the house, I wouldn’t have been able to see him at all. My jacket was holding its own in the storm, just barely, but my jeans felt soaked, my hair even worse, and all I could bring myself to care about was the feel of his hand still gripping mine. How his skin felt hot and rough, even during a cold rain.
“I left,” he said, stepping so close I had to look up at him, “because you’re trusting…and I don’t want to ruin that. I’m not the person for you.”
I hoped that wasn’t the end of his explanation, because the darkness had emboldened me and I had at least thirty more questions. “Why can’t it be you? Is it my mom? Is it money? Why won’t you talk to me?”
“Screw money,” he said through his teeth, hair plastered to his head. “It’s not about money, and if you weren’t so naïve, you’d understand what I’m talking about without me having to explain it to you. Dammit, Missy, I swear if I start talking—” He shook his head, dropped my hand, and abruptly turned to stalk back to the house.
I stared after him, watching him go again. “So explain it!”
“No!” he shouted over his shoulder.
My cold hands tightened into fists. I was finally done with being afraid. “You’re a damn coward, William Sawyer Moore!”
He pivoted about twenty feet away, a dark silhouette against the light of the house. “Really?” he shouted through the rain. “You think so?” I had no time to think as he headed straight for me, crossing the ground between us with a determined stride. I stumbled back, unsure of him, of me, knowing I’d just screwed us both with my big mouth. Will never backed down from a challenge, ever, and I remembered this little flaw too late as he halted in front of me and grabbed my coat at the sides with a sudden jerk, his fists clenched around the fabric. He didn’t push me away or pull me closer, just held me in place as though he didn’t know what to do with me.
I blinked against the rain as it dawned on me that he was waiting for me to take it back. To apologize for calling him a coward. “You can wait forever,” I said, feeling waterlogged and nearly drowned, “but I’m not apologizing for what I said. Not when it’s the truth.”

About the Author:
I spent the first three decades of my life in Portland, Oregon, before picking up everything and moving to the South for much needed sunshine and a change of pace.
When I’m not reading or penning young adult novels, I’m absorbed in all things supernatural, fantasy and sci-fi. Most recently, I’ve become hopelessly addicted to the BBC and anime.
My husband and I are also very devoted to our numerous adopted animals.

Links to Purchase eBooks
Link To Buy INNOCENT On Amazon