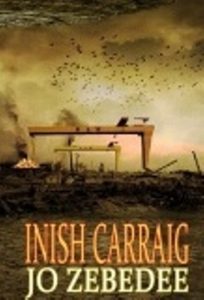 Post-alien invasion, and Belfast is in ruins. Surviving on the streets, John Dray will do whatever it takes to keep his younger siblings safe – even taking the fall for the local hard man.

Sent to Inish Carraig, a bleak prison, managed by the alien Barath’na, he uncovers a secret which threatens Earth. He has to reveal it. First, he has to get out.

What Inspired You to Write Your Book?
I really wanted to write a book about Belfast that wasn’t about its history, or the Troubles, but about the city and its people today. The ‘what if…?’ that came to me was ‘What if the aliens invaded Belfast…’

From there, the world expanded, and the story, and I found it taking on the feel of the land – hard-edged and fast-paced. I think I captured what I hoped, and packaged Belfast and Northern Ireland into a fun science fiction thriller.

How Did You Come up With Your Characters?
I have no trouble with this – they come to me very easily.

John, the main protagonist, is the sort of teenager anyone could meet, cast into a horrendous situation. It was easy to see how angry he must be and how hard it must be for him to trust anyone. His sister, Josey, is a different sort – gentler but, arguably, with more steel in her. To capture her took a little more work, as I didn’t want her to appear weak but also not to need an agressiveness about her.

The final character, Henry Carter, was both the hardest and the easiest. He is the adult taking some sort of charge of the situation, but he has a lot of guilt in his background. That guilt, merged with a duty that he finds himself having to challenge, was hard to capture.