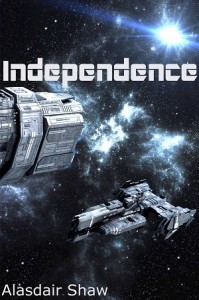 In the aftermath of a battle a ship drifts helplessly in space. Is the strange new warship they were fighting still out there? Will it come back for them? Commander Johnson faces a desperate race to get her destroyer back into action and save her crew.

What Inspired You to Write Your Book?
It was originally written as an entry to the James White Award. I wanted to see if I could write fiction (I had already published several non-fiction books).
The actual story came about as I wanted the ascent of one character mirrored by the descent of another. It kind of grew from there. The other main theme would be somewhat of a spoiler if I discussed it here!

How Did You Come up With Your Characters?
Commander Olivia Johnson is intended to be a reasonably realistic naval captain. She is drawn from my own experience and many others I have met. Perhaps she was a little too realistic to start with – in early drafts beta readers complained that she wasn’t a real captain and went on to give examples of ‘real’ captains from fiction and give completely unrealistic suggestions for what he would do in the situations which she faced.

The mysterious Indie doesn’t even know who he is himself. He discovers along with the reader. A lot of his early scenes were inspired by various knocks I’ve had in climbing and caving, though not (luckily) the memory loss.

There’s been an accident.

“CAN ANYONE HEAR ME?”
Silence.

Dark, weightless and alone.
#
The bridge was a mess of confusion. The only light came from the few working consoles and the occasional flash of a shorting circuit. A klaxon howled in the background, almost drowned out by the rush of fresh air from the vents. A flicker. In that brief moment of illumination the crew appeared frozen in their tasks. Another flicker. A new tableau was presented. One more flicker then the emergency lights stayed on.

Commander Johnson ran through the priorities drilled into her since she had started Command School. Life support: Repulse was leaking air and down to emergency power. Sensors and comms: all external feeds down, internal net patchy. Weapons: the spinal railgun was useless now that the reactor was offline and the control system for the plasma cannon had been overloaded. Propulsion: docking thrusters only, she couldn’t even jump.
Not only were they still alive but it looked like they might have taken out a Republic hunter killer. She had been sure they had it but then they’d lost their sensors.
“Get me an external camera. Now.” She coughed on acrid smoke from burning plastic that still lingered despite the emergency flush. “Priority over everything bar life support.”
She had to know if it was still out there. She had to know if it was coming to finish them or limping off hurt. She couldn’t make decisions without information.

Johnson looked to Lieutenant Levarsson. She was slumped against the tactical station. She’d been the one to drop the nuclear mine when she saw the hunter killer about to cross their wake. It had been a reflexive action but had probably been what had saved them. There was a medic kneeling beside her now. He was presumably concentrating on the stats his Electronic Interface was giving him. Although Johnson’s EI wasn’t giving her anything useful right now, the medic’s would be interfacing directly with Levarsson’s.
“Damage report, Ma’am.”
She had been so intent on watching the resuscitation that she hadn’t noticed Sub-Lieutenant Hanke approach her chair. Inwardly cursing her loss of the big picture she accepted the tablet from him. With
the net being down they had fallen back on humans to collate and deliver data.
“Thank you Lieutenant.”
She glanced at the congealed blood on his temple, trying not to make it obvious. He was 16 and he’d just seen his first combat. It was probably minor, scalps bled a lot, but she didn’t want him neglecting himself.
“Make sure you get checked out by the medics.”
The Lieutenant turned to leave then paused.
“Ma’am?” he asked carefully, “we shouldn’t be alive now should we?”
The demand for replacement officers was outpacing the ability of the academies to churn them out. She could spare him the lecture on defeatist talk this time. A few words in private when it was all over would be more effective anyway.
“Let’s just concentrate on staying that way shall we? Carry on Lieutenant.”
The thing was she knew he was right. Given her post she knew more than most how badly they were losing. No destroyer had ever stood toe to toe with a hunter killer and survived. Having to hide the truth weighed heavily on her.
She steeled herself to read the headlines. The central areas had been made airtight. Backup power was stable. Engineering was attempting to re-initiate the reactor. Work was progressing on bypassing the damaged relays for the external sensors. The speed of the response heartened her. They had finally stopped looking to her to hold their hands.

The butcher’s bill currently stood at 26 dead, 12 wounded and 15 missing out of a total complement of 394. Several compartments forwards had not yet been reached by the rescue teams. Any crew left alive in them would likely be in the dark, weightless and disoriented.
As the captain she had to remain impassive. She had to appear to be in complete control, undeterred by any setback. The only way she knew to do that was to lock out the horror for now and just focus on running through checklists. Usually it worked its way out later in her nightmares.
Rousing herself Johnson walked over to Levarsson’s empty tactical console and logged in. She started running simulations. They couldn’t do anything now but she had to assume they’d get Repulse working again.

At first it was just the sensation of bruises starting to form on one side of his body. Then he became aware of the burns.
He must have been blocking it out earlier. Adrenaline, that was probably it.

Why couldn’t he move?