You are here: Home / Fiction / Mystery/Suspense / Ice on the Grapevine by R.E. Donald 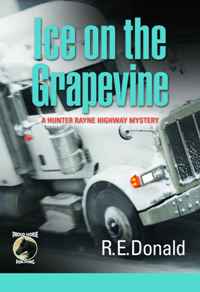 “Ice on the Grapevine: A Hunter Rayne Highway Mystery” is a tense murder mystery featuring tough-minded ex-homicide detective turned eighteen-wheel truck driver Hunter Rayne. … [It] is a riveting mystery that will keep the reader guessing to the very end. – Midwest Book Review

This is a well spun yarn, full of plot detail and credible human response. Whodunit addicts will not be disappointed. – The Kindle Book Review

On a warm July morning in L.A. County, a frozen corpse turns up at a highway brake check just south of the Grapevine Pass. Ex-homicide detective Hunter Rayne, who now drives an eighteen wheeler, is persuaded by his irascible dispatcher, Elspeth Watson, to help clear two fellow truck drivers who are arrested for the murder. His job is made more difficult by the fact that the suspects, a newlywed couple, won’t speak up in their own defense.

The circumstantial evidence is strong, and a rookie detective from the L.A. County Sheriff’s Department is eager to score a win. The investigation crosses the Canada-U.S. border when the victim is identified as a second rate musician from Vancouver, and it turns out there were more than a few desperate people happy to see him dead, including the accused couple. Hunter has to use all his investigative skills to uncover the truth.

Hunter’s ex-wife maintains that by taking to the highway Hunter is running away from his past, but he believes that the solitude of days on the road is helping him to heal from guilt over the failure of his marriage and the suicide of his best friend. Tangled relationships and multiple suspects emerge throughout the novel, as Hunter butts heads with more than one officer of the law to solve the crime. A 2012 Global Ebook Awards finalist.

What readers are saying:

“Those were the best mysteries I’ve read in a long time!! As soon as I finished the first one I bought the second and felt empty when I finished it! The characters were awesome and so there that I somehow think they are in my life!”

“… this book caught my attention from the very first pages and it only got better. …I recommend this book to anyone who has a love for a good mystery.”

What Inspired You to Write Your Book?
I love California. During the 90s, I made at least one road trip a year from my home in British Columbia to visit family in Southern California. Long stretches of the I-5 provided me with a great opportunity to think about plots for my next mystery novel. I miss those long drives, but with horses and dogs at home, I don’t have the luxury of time I once had, so although I still manage to visit every year, I have to take a plane.

How Did You Come up With Your Characters?
My hero, Hunter Rayne, is a truck driver because that’s a world I’m very familiar with. He’s also a former RCMP homicide investigator, but now has no real excuse to get involved in investigations unless he’s persuaded to by someone he cares about. In “Ice on the Grapevine”, two fellow drivers are sitting in a California jail, arrested for a murder they didn’t commit. Or did they? Hunter’s boss, El Watson, persuades him to get involved to prove their innocence. Of necessity, some of the characters are either with the L.A. County Sheriff’s Department or lawyers representing the accused.

Book Sample
Every morning felt like Christmas now that he had a wife.

The sun had not yet mounted the ragged hills, but the sky behind the San Gabriels was that washed out yellow that signaled another hot July day in L.A. County as California Highway Patrol officer Lucas Triggs neared the end of his graveyard shift. Lucas could hardly wait to get home; home where his sweet little wife was waiting for him with a good morning kiss, a soft cuddle and maybe more if there was time before she left for work. She’d make him a fine breakfast of eggs and sausages and a slab of ham. Mmmm, mmh. The thought of Sylvana made him grin like a fool as he cruised his assigned stretch of Interstate 5, elbow out the window, uphill now between dry slopes dotted with scrub grasses and sage. He wished he could crank up KZLA and sing along but there was too much static this far north, so instead he hummed the chorus of “Standing Outside the Fire” over and over as he kept half an ear on the police band.

Lucas Triggs was forty-three years old and there’d been few women in his life. Oh sure, there were the ones he’d paid for when he sailed with the navy, but that wasn’t like having your own girl. Let’s face it, with his hare lip he wasn’t the world’s best looking guy. The day he’d stopped to help Sylvana and her mother with a flat tire near the Kern County line he now counted as the luckiest day of his life. Eight months later, here he was, a married man with a family on the way. He’d never known it would feel this good, having someone to welcome you home and kiss you good bye and warm your back with her sweet breath as you slept. He’d never imagined how fine it was to sit in front of the TV with your woman in your lap, your hands cupped over her taut round belly and her own hands resting like baby birds on yours. “I get to hug you and Junior all at once,” he’d told her, and she giggled like a little girl.

The Chev’s radio crackled to life. A code 10-54, possible dead body at the brake check north of the Templin turn off. “Trucker called it in,” said the dispatcher. “He’s standing by on the emergency channel if you need specifics.”

Lucas replied that he was on his way, and flipped to Channel 9 on his CB. The trucker wasn’t hard to raise, but the signal was poor. “… a cop, so I know better than to touch a dead body, you know what I mean? Where you…”

Lucas powered up his window for a closer listen. “Come again,” he radioed.

The signal cleared. “CHP, you want to get your ass over here PDQ. I just pulled into the brake check north of Valencia, got out to take a piss, and almost tripped over some poor bastard all curled up like a pretzel.”

“I think so, but I sure as hell ain’t gonna touch him. My brother-in-law’s a cop and I know the drill. You touch him if you want to, but I got the hell outa there soon as I saw him, and I ain’t gonna let nobody else near him either.”

Lucas turned on his flashers and depressed the pedal. The Chevy growled and sprinted toward Gorman, where he turned around and headed south. Minutes later, he pulled off the I-5 into the brake check area, a paved level clearing about the size of two football fields, where he was hailed by a big man in blue jeans and suspenders, his gray tee shirt darkened by sweat rings beneath the armpits. He had a black beard and a barrel shaped torso that reminded Lucas of Bluto. Lucas nosed the Chevy in beside the man’s big Kenworth and got out. Another big rig was stopped near the far end of the brake check, and a VW bus that had seen better days was perched half on and half off the asphalt nearby, its side door open. As Lucas watched, a skinny man with an equally skinny ponytail and a Hawaiian shirt that fluttered around his bony frame like a weather beaten flag, hopped out holding an enormous plastic mug.

“I never touched the guy, and I never let those bozos…” Bluto nodded in the direction of the VW. “… near him either. My brother-in-law’s with Houston PD, so I know the drill. He tells me about some of the shit he’s seen go down.” He started walking toward the back end of his rig and Lucas followed at his shoulder. “No way I’m gonna mess up a crime scene, and I didn’t let those other bozos even come close.”

They rounded a pile of dirt, one of several that ringed the brake check, and Lucas saw a patch of color against the sandy soil. It was a man, or the body of a man, with his legs tucked up and hugged tight to his chest, his neck angled forward as if he were resting his head on his knees. He wore blue jeans, Nikes, and a polo shirt of green and white and blue. Lucas couldn’t see his face. They stopped and stood about five yards away, Bluto with his thumbs hooked behind his suspenders.

“See? I told you he was all curled up,” said Bluto, nodding emphatically as if Lucas had disputed it. “Damn strange, the way he’s lyin’ there, ain’t it?”

Lucas had to agree. It wasn’t so much that the man’s fetal position was awkward or unusual, it was that he was lying on his right side, and so stiff that his head and feet didn’t touch the ground.

The voice belonged to the skinny man from the VW bus, who had caught up to them and now stood beside Lucas, sipping at the contents of his plastic mug. “Kinda looks like that little guy from Laugh-In, huh? You remember that? You know, the little guy in the raincoat who used to fall over on his tricycle and just lie there?’

“Step back, sir,” said Lucas. “You’ll have to keep clear of this area.”

Bluto turned around and glared at the skinny man, started shooing him away with both hands. “Some assholes are like vultures, feeding off other people’s misery,” he said in a low voice to Lucas, then louder, “This ain’t no picnic, Buddy. Get out of here and don’t touch nothin’.”

Lucas motioned Bluto to stay put, then approached the hunched up figure, watching carefully where he placed his feet so as not to obscure any tracks, and making note of where his own footprints lay. He suspected that he was going to have to call the county coroner, but he’d never seen a corpse that looked quite like this before. Proper procedure was to first determine if there was any sign of life. If the poor bastard was alive and having some bizarre seizure or something, there’d be hell to pay if he didn’t call an ambulance first. When he reached the body, Lucas squatted, elbows resting on his thighs, to examine the man more closely.

At the nape of his neck, the man’s dark hair fell in loose curls, parting to reveal the knobs of his upper spine. His forearms were thin but muscular, his hands clenched into fists. Folded up the way he was, it was hard to judge his height. Average, Lucas guessed. His skin was white. Very white. Lucas reached out to place two fingers against the man’s neck, intending to feel for a pulse in the carotid artery. His hand jerked away as if he’d been burned, and he was so surprised that he stumbled backwards, barely able to keep from falling flat on his butt in the dirt.