You are here: Home / Fiction / Historical / I Stopped Time by Jane Davis 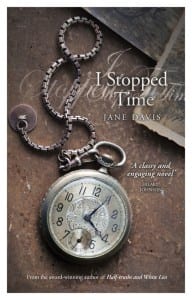 Wouldn’t you feel cheated if it turned out that the woman you’d imagined to be the villain of your childhood was actually someone rather extraordinary?

Edwardian Brighton. A wide-eyed girl enters Mr Parker’s photographic studio and receives her first lesson about the rising medium that is to shape her life: “Can you think of a really good memory? Perhaps you can see it when you close your eyes. Now think how much better it would be if you could take it out and look at whenever you wanted to!”

2009: Disgraced politician Sir James Hastings has resigned himself to living out his retirement in a secluded Surrey village. He doesn’t react when he learns that the mother who had abandoned him dies at the age of 108: he imagined she had died many years ago. Brought up by his father, a charismatic war-hero turned racing driver, the young James, torn between blaming himself and longing, eventually dismissed her as the ‘villain’ of his childhood. But, when he inherits her life’s work – a photography collection spanning over six decades – he is forced to both confront his past and re-evaluate what he wants from his old age. Assisted by student Jenny Jones, who has recently lost her own mother to cancer, Sir James is persuaded to look at the photographs as if he is seeing through his mother’s eyes, only to discover an extraordinary tale of courage and sacrifice.

“Three. I have three stories,” Lottie Parker tells her solicitor while putting her affairs in order. “But it was Oscar Wilde who said that a story is almost certainly a lie.”

‘Jane Davis is truly a writer’s writer. She has taken an entire century – a feat in itself worthy of Ken Follett or Gabriel Garcia Marquez – and covered it with the richness of her characterisation, presenting a family that is beautifully flawed, brimming with affection, and inimitably human.’ Book blogger, J Metcalf

How is Writing In Your Genre Different from Others?
This was my first venture into historical fiction, and perhaps, in retrospect, taking an entire century as my timeframe was a little ambitious, but in for a penny in for a pound – and I’m gratified that reviewers seem to think my gamble has paid off.

Book blogger James Metcalf wrote, ‘She has taken an entire century – a feat in itself worthy of Ken Follett or Gabriel Garcia Marquez – and covered it with the richness of her characterization, presenting a family that is beautifully flawed, brimming with affection, and inimitably human.’)

C Bannister wrote: Being interested in more recent history this book was right up my street and I especially liked the fact that it examined the reality of the women left behind during the First World War. This book deserves to be read by all who enjoy a really good story, well defined characters and detailed research to back it all up! I would especially recommend it to fans of Kate Morton and Rachel Hore.

The trick to pull off is to portray a setting while not letting it dominate.

What Advice Would You Give Aspiring Writers?
One of the most difficult things you will do as a writer is have the confidence and the trust to allow another person to read what you have written for the first time. Author Debi Alper’s advice to me was ‘Develop the hind of a rhino’ and that certainly helps because, if you are starting out, believe me, you will have your fair share of rejections.

But there are huge positives about being a writer in the here and now. We have a huge amount of options. I think one of the key things if you intend to publish is to decide what your goals are. Both J K Rowling and Stephen King have spoken about the pleasure of writing with anonimity, without a publisher’s deadline, without any pre-conceived expectations from a waiting public. Remember that writing is a priviledge and a pleasure, but if you are writing with a view to traditional publication, understand that you may have to make compromises, such as sticking to the same genre, which you may feel will stifle your creativity and – as I was advised to do – dismember a few bodies and scatter them around your location. The current market in the UK is incredibly commercial and is looking for high concept books, with ‘dark family secrets.’ But two years ago it was vampires. Don’t stick to a current trend, take two years writing your novel and find you’ve missed the boat.

For further information, or to sign up for pre-launch specials and notifications about future projects, visit the author’s website at www.jane-davis.co.uk.

What Inspired You to Write Your Book?
Reading a biography of Lee Miller, one of my heroines. I knew her photography but, as it turned out, very little of her life. She was an extraordinary, extraordinary person. One of the most sought-after fashion models of her day, who became a muse to surrealist photographers and artists such as Man Ray and Picasso. But she had always yearned to be on the other side of the lens and, in time, she became highly respected for her own work. At the outbreak of World War II she became dissatisfied with her fashion work and documented the Blitz for Vogue, then underwent yet another transformation to become the only woman in combat photo journalism in Europe, taking incredible personal risks. Lee also recorded the first use of napalm at the battle of St. Malo, the liberation of Paris, and she was there when the victims of Nazi concentration camps were liberated. Her personal relationships were never straightforward, but it a huge testament to the strength of her personality that all of her ex-lovers became friends. She eventually settled down in Sussex with the artist and curator, Roland Penrose, with whom she had a son, Anthony. He knew Lee as an embarrassing mother and had no idea of her history until, after she died, he discovered her collection of work. I found his comment that he was cheated out of knowing someone really very extraordinary extremely poignant, and it set me on the road to discovering one of my main characters, Sir James Hastings.