You are here: Home / Fiction / Science Fiction / I Have Three Things to Tell You, My Friend by RM DAmato 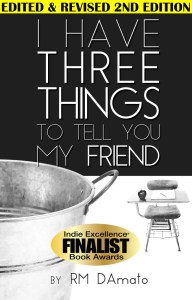 2014 National Indie Excellence Award Finalist The Golden Years Can Be a Killer!
In 2033, every senior citizen is offered a second chance and a second career. At 65, John Sinclair, a life-long teacher, faces two choices—a second career or permanent retirement and early death. The state will pay for his genetic rehabilitation, university education, and an extended life span of 160 years. It’s guaranteed! All Sinclair has to do is to mentor his young apprentice, commit to a new career, and avoid any dealings with a daft and spiteful school janitor, Fernando Smith. Like all incredible offers, Sinclair’s new career comes with a toxic price tag. The question is—is he willing to pay?

What Inspired You to Write Your Book?
My experience as a teacher inspired the plot for the book. I also took some inspiration from the theme of retirement in Shakespeare’s The Tempest and the theme of the corruption of technology from Brave New World.

How Did You Come up With Your Characters?
The characters were created as an amalgam of educators in my career and from the play and novel. Also, I used creative license with my real life experiences and acquaintances in the field.

Book Sample
I continue to call him Mr. Sinclair, even though by this time I am years older than he was when we first met.

I met him during the late summer season, when life is rich and the voices of decay begin their siren call. He became my mentor when I first accepted the teaching internship from the university soon after the Federal Rehabilitation Amendment had been passed. The rest of the story will unfold later, but we met at my first crossroad in life. In fact, he helped to create that dynamic event in my life. The second crossroad took me away from teaching and made me an artist and historian, living off a miserly federal stipend with no prospect of a second career. Others like me usually wait for an early and natural death.

About the Author:
RM DAmato is the author of “The Last Seminarian”, “I Have Three Things to Tell You, My Friend”, and a collection of poetry, “Random Musings of a Late Baby Boomer”.

RM DAmato received a B.A.from California State University, Northridge in 1982 and an M.A. from U.S.C. in 1983. He worked as an assistant editor for the Los Angeles Times but spent most of his career as a teacher in California and Florida. He is married with one daughter. Currently, he is an adjunct professor at Florida International University.

His principal literary influences are Chaucer and Bukowski. He enjoys biking, the martial arts, traveling and a good joke.

Links to Purchase Print Books
Link to Buy I Have Three Things to Tell You, My Friend Print Edition at Amazon

Links to Purchase eBooks
Link To Buy I Have Three Things to Tell You, My Friend On Amazon