You are here: Home / Pet and Animal Books / Dogs / Hunter Down by Jerold Last 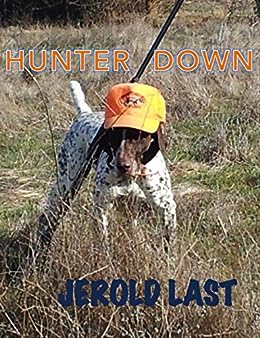 What inspired you to write your book?
My wife Elaine breeds and raises German shorthaired pointers, which participate in hunt tests similar to those in the novel. I know the setting and the training techniques very well. The milieu seemed a perfect backdrop for a sequel to a very popular earlier novel in this series, The Deadly Dog Show. With Elaine’s help with the technical parts and editing the book, it pretty much wrote itself. By an odd coincidence, Juliet and Romeo, the canine stars of the book, share many traits in common with our own Jolie and Ries.

About your Book:
A high powered rifle shot rings out in the early morning stillness at a hunting preserve in Southern California leaving a hunter down, launching Roger and Suzanne into another suspenseful mystery thriller. In a complex whodunit set against a backdrop of pointing dogs and canine hunt tests, Roger has to solve a murder case with no clues, no suspects, and no apparent motive. Suzanne has her hands full handling their puppy Romeo at the Junior Hunter level, while Romeo’s mother, Juliet, is attempting to qualify as a Master Hunter with a professional handler. There’s lots of action as the dogs hunt birds and the humans hunt for a cold-blooded killer. Dog lovers, mystery fans, German shorthaired pointer owners, and fans of the Roger and Suzanne mystery series will especially enjoy this novel.

How do you see writing a book in the Pet Genre as different from writing other genres of books?
There are pluses and minuses to featuring dogs as characters in a novel. The hardest part is giving them distinct personalities and integrating them into the flow of the mystery. The best part is sharing what makes us love the real animals and introducing new readers to their worlds. Ultimately, the dogs (pets) are just like any other human characters we invent for a novel; they just have twice as many legs!

Advice to someone that is thinking about or currently working on a pet book
Know your pets and their world well, so your book can educate your readers as well as entertain them. I began the book as a conventional mystery, then incorporated the dog’s world into the story line.

Author Bio:
The author is a Professor of Pulmonary and Critical Care Medicine at the University of California’s Medical School at Davis, near Sacramento in Northern California. Jerry writes “tweener” mystery books (tough mystery stories that follow the cozy conventions of no graphic sex and no cussing) that are fast moving and entertain the reader. Several of his books introduce the readers to a region (South America) where he has lived and worked that is a long way from home for most English speakers. He and his wife Elaine lived previously in Salta, Argentina and Montevideo, Uruguay. Jerry selects the most interesting South American locations he found for Roger and Suzanne to visit while solving miscellaneous murders. Montevideo, Salta, Machu Picchu, the Galapagos Islands, and Iguazu Falls are also characters in these books, and the novels portray these places as vivid and real. Jerry and Elaine also breed prize-winning German shorthaired pointer dogs; Elaine also provides technical advice for Jerry’s dog-related novels like The Deadly Dog Show and Hunter Down, as well as editing for all of the books.