You are here: Home / Autobiographies, Biographies & Memoirs / Hungry for Life by Rachel Richards 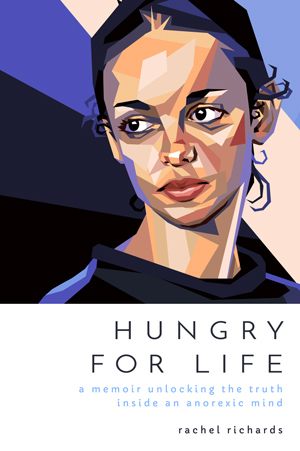 My memoir begins at my college graduation ceremony, when I admonished myself for failing to feel the exuberance that such a day should elicit. I observed, as if from far away, excitement all around me. I was about to graduate with honors and a degree in theater. But how will I pursue acting when I weigh a mere 69 pounds?

My story then jumps back to kindergarten, where I was punished regularly. No one seemed to notice how unusually troubled and angry I was at only five years old.

I spiraled downward into the creepy depths of anorexia nervosa, depression, and obsessive-compulsive disorder. At school, I was bullied relentlessly. By eight years old I was restricting food and studying late into the night in order to get perfect grades. I became obsessed with even numbers and exhibited bizarre compulsive rituals, like repeating everything I said, and exhaling whenever I walked through a doorway.

My self-destructive behaviors were a desperate attempt to gain control in a world I perceived as chaotic and terrifying. As I grew to hate myself more and more, these behaviors also served to satisfy my need for punishment. I had no words to communicate what I was feeling, since I couldn’t understand it myself.

My cries for help went unanswered by my parents and teachers, until at eleven years old I ran away and was physically forced back home by the police. I was hospitalized and told it was to protect me from injuring myself.

After that, my parents tried sending me to several different psychotherapists, each one worse than the last. Dr. Argyles always put his smelly feet up on the coffee table and took personal calls during our sessions. Dr. Discipline was convinced that all my problems were due to a lack of parental discipline.

I threw nightly temper tantrums and often tried hurting myself ―cutting my fingers, banging my head into a wall, and suffocating myself with a pillow. I wanted the physical pain to dull the agony I was feeling inside. It didn’t.

I felt as though a war had broken out in my head―an endless battle between good and evil, healthy and sick, and life and death. The healthy part of me wanted to fight the sickness that had invaded my mind, but that monster grew stronger and rational Rachel lost her footing.

My despair erupted in hatred towards the people who loved me most. My big sister, Valerie, was obese, which disgusted me. I refused to speak to her for over a year. I also turned on my Dad, especially after he hit me to try to stop me from running away.

But there was a single bright spot in my life, and it shone like a spotlight. I found joy on the stage, performing in school and community theater musicals. On stage, I could take a break from my miserable self and become someone else―someone better.

I saw a bulging belly when I looked in the mirror, and I fantasized about cutting out my stomach with one of my mom’s large kitchen knives. My starvation was a gradual process fueled by anger and fear, and driven by willpower. I was rewarded with a sense of comfort and security as my body mass was slowly replaced with emptiness. I wanted to become invisible, but at the same time I was desperate for someone to see how badly I was hurting.

The second time I ran away, it was the middle of the night and I wore only a t-shirt. I sat in the school parking lot and fantasized about being murdered and discovered the next morning in a pool of blood.

In college, I grew increasingly isolated as I wasted away. I studied obsessively and starred in many shows, but my roommate, Samantha, watched in horror as I became skeletal.
My recovery process began after junior year when my doctor sent me to the hospital despite my crying and pleading to let me go home. The reader joins me as I struggle to gain weight against my will, only to suffer relapses and be hospitalized again.

I was born healthy and grew up in a comfortable home with a loving family. So what could have caused me to develop a deadly mental illness at such an early age? The answer is as complex as the disorder itself. It took a combination of genetics, heredity, parental influence, society, environment, and circumstance to create the morbidly anorexic girl I became.

I give a detailed inside view of the fascinating and flawed recovery process, both in the hospital and out, being force-fed 4,000 calories a day, and the interesting tricks my fellow patients used to try to “beat the system.”

Throughout, I struggled with the decision of whether to end my life or fight my way through recovery and risk finding out what was on the other side. I also made unlikely friends along the way, including a six-year-old boy with a fatal illness.

It was a surprise even to myself that, after putting some pounds back on and spending all that time in recovery, I still had not recovered. Gaining weight did not erase the underlying issues that caused me to starve myself in the first place. My anorexia never stopped fighting for control over my body. It wasn’t until I had gained enough weight for my brain to function properly that the real battle began.

It took a devastating break-up with my first boyfriend, in our Harlem apartment, to realize that I needed to truly recover if I were ever to have a chance at life. Would moving back in with my parents, pursuing my acting career, and trying online dating help me win this battle once and for all?

The part of me that longed to live, to pursue my acting career, to find some happiness in life, had to finally face up to the anorexia that had long since become my identity. It was an identity that could easily kill me, but at least it was familiar and reliable. If I wasn’t anorexic, then who was I? And did I want to find out?

What Inspired You to Write Your Book?
Several years ago, I made a quick decision to begin scribbling down my story. I wasn't sure why at the time, though it was partially an attempt to make sense of my turbulent past, and a quest for catharsis. But in retrospect, I believe what compelled me to write was the frustration over feeling misunderstood with regards to my illness. I was driven by a burning need to cut through all the misconceptions and assumptions surrounding anorexia, and reveal the complexity and seriousness of this mental disorder.

Self-starvation does not define anorexia, but is merely a symptom, albeit a deadly one. An eating disorder is a beast that resides deep within, destroying a person slowly from the inside out. Research has shed light on anorexia, but studies cannot accurately depict an individual's mind as she struggles with her disorder. What is going through her head when she decides to stop eating, to study compulsively, to shut out her family and friends, to injure herself, and to live in isolation? My book reveals it all.

What can you do when a person you love is withering away right before your eyes? It is essential to understand the mind of the sufferer in order to know how to help. We must resist the impulse to go with our gut, because our instincts are often misguided when it comes to this issue.

If you or someone you know suffers from an eating disorder or is a concerned parent, is anxious about weight and dieting, has an addiction, or wants to learn more about the mystery of how an eating disorder develops and the multifaceted and complex road to recovery, I urge you to read my story. And please never hesitate to contact me with your thoughts or questions.

Buy Hungry for Life On Amazon