You are here: Home / Fiction / Drama / How to Grow an Addict. a novel by J.A. Wright 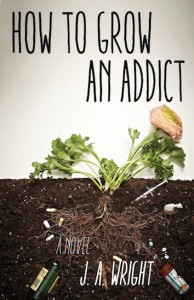 HOW TO GROW AN ADDICT: a novel, is a coming-of-age story that traces Randall’s life from neglected child to adult drug addict.

Set in the Northern California in the 1980s and 90s, the novel opens with twenty-three-year-old Randall Grange in The Facility, a 30-day rehab program for drug addicts and alcoholics. A social worker has convinced her to seek help for her troubled life after Randall arrived in the hospital following a night of drinking and waking up to discover she’d been drugged and being raped.

By age eight, Randall already knows her family is not normal. She has a troubled relationship with her cantankerous alcoholic father, who she’s convinced never wanted her in the first place. Her submissive mother rarely stands up for herself or Randall and drowns her issues—including the very public affair her husband is having with his own brother’s wife—with pills and alcohol. Both parents favor her older brother Robbie, and Randall often feels like a stranger in her own home.

Her Aunt Flo and Uncle Hank provide the only nurturing Randall receives as a child. They live in a beautiful cottage home with a large garden, a special swimming pool, and several treasured cats, and Randall is a constant visitor.

At age eleven, Randall learns from Uncle Hank that he has a box of money, gold and gems, hidden under the floorboard of his garden shed. He shows her the contents and asks her to keep it a secret. A few weeks later, when he slips and falls to his death on the pool patio and dies, Randall is convinced she’s responsible for having neglected to clean up her suntan oil spill the day before.

Heartbroken and guilt-ridden, Randall’s relationship with her aunt becomes strained; she doesn’t mention Uncle Hank’s hidden box, however, because she assumes Aunt Flo has seen it when she notices her wearing a big new ring at his funeral. It was the ring Uncle Hank had made for their 30th anniversary, a few weeks before he died, using several of the gems he had in the hidden box.

With Aunt Flo unavailable, not many friends, and both parents at work, Randall is anxious and lonely and begins to help herself to her Mom’s pills. Her drug use escalates throughout her adolescence, and she adds alcohol to the mix when she can. Her teenage years are filled with drunken episodes and horrific experiences, including the death of her dad (just days after she wrecks his favorite car); a sexual relationship and pregnancy with an underage boy; a lost opportunity to forge a relationship with a half-sister; and Randall’s first abortion, which she funds by breaking into Uncle Hank’s shed and helping herself to some money from the undiscovered treasure box he left hidden there.

At eighteen, she gets a job as a store checker and starts a relationship with her abusive, married boss in exchange for drugs from his pharmacy. It doesn’t take long for her to become a full-blown addict and even more of a mess.

In the next few years, Randall’s life spirals downward as she continues a relationship with her boss, who she believes will one day leave his wife and marry her.

By twenty-three, Randall’s drug use is off the chart, and she isn’t interested in stopping. She has her second abortion after her boss/boyfriend demands it. Weeks later, she overdoses at a party, is raped in a car by a stranger, and then manages to exit while the car is still in motion. This lands Randall in the hospital, bringing us back to the opening scene of the book. The Facility turns out to be full of druggies and alcoholics, and Randall’s convinced she doesn’t belong there. A bit of honesty and empathy and from the staff convinces her to stay, and to confess her secrets and to make an effort to change her life.

Just before she’s released from the facility, Aunt Flo pays her a visit, and Randall confesses her pent-up emotions about her belief that she was responsible for her uncle’s death. Flo tells her in no uncertain terms that it was not her fault; Uncle Hank died of a heart attack. Randall is floored by this information and leaves the Facility a few days later with a different outlook on life; her guilt lifted. When she later visits her aunt, she discovers that Flo has had troubles of her own since Hank’s death. She has no money and owes thousands in back property taxes; she fears the county will take the home she and Uncle Hank built. Randall realizes that Aunt Flo still doesn’t know about the hidden box. Randall has to make a critical decision, to give up what possibilities the money might provide her, or to help the one person who’d been a stabilizing force in her life as a child. Randall’s willingness to retrace her journey to rehab is revealing, healing, and liberating.

How to Grow an Addict is a story about a life that’s destined to crash, and the determination it takes to turn it all around

What Inspired You to Write Your Book?
I wanted to write a book that accurately reflects the impact a dysfunctional family can have on a sensitive child. I know many recovering drug addicts and alcoholics who lived in a state of despair for years before hitting bottom and getting help. Most of them came from a family similar to the one outlined in my novel. I’ve been in recovery from drug addiction for more than 30 years, and I’ve had for the past fifteen I could (should) write a story that non-users could relate to, and that problem drinkers and drug users could identify with.

How Did You Come up With Your Characters?
This might sound weird, but a few of them came to me. I think Randall began talking to me years before I began writing about her. Some of the other characters, such as her father, are based on men I’ve known throughout my life (unfortunately).