You are here: Home / Autobiographies, Biographies & Memoirs / How Many Planes to Get Me? Nine children adopted into a New Zealand family by Jonquil Graham 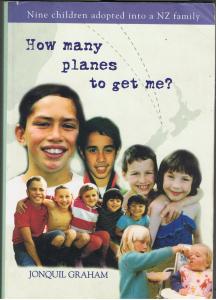 A funny heartwarming story of a New Zealand couple who adopted nine children and fostered many more. Shocked by the plight of Romanian orphans, Jonquil flew to Romania and brought home tiny malnourished identical twins. But she never forgot the little boy she left behind. Leaving her husband and eight children on the family’s kiwifruit orchard, she returned to Romania, but never imagined the protracted nightmare ahead. Later she flew to Russia and adopted 8 year old twins from an orphanage near the Arctic Circle. A book to make you laugh and weep.

What Inspired You to Write Your Book?
I was inspired by Helen Doss who wrote “The Family Nobody Wanted”. She adopted 12 children in the 1940s. I rang her in America (from NZ) and she encouraged me to write my own amazing story. I helped start Inter-country adoption in New Zealand after being dismayed by so many abandoned and homeless children around the world. Also, I wanted to inspire couples to think about giving a home to a child who had no family of their own, and it seems my book has done just that.

About the Author:
Jonquil was born in the UK, raised in coastal Sydney, Australia and lives in NZ. She and her husband adopted children of various nationalities and she helped establish Inter-Country adoption in NZ. She also wrote “Once I was a Teenager: Growing up in the 50s and 60s in Australia and beyond”, which is particularly popular with baby boomers.

Links to Purchase Print Books
Link to Buy How Many Planes to Get Me? Nine children adopted into a New Zealand family Print Edition at Amazon

Links to Purchase eBooks
Link To Buy How Many Planes to Get Me? Nine children adopted into a New Zealand family On Amazon