You are here: Home / Non-fiction / Body/Mind/Spirit / Housekeeping for the Soul by Sandra Carrington-Smith 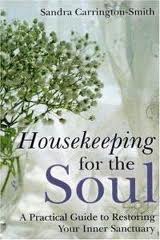 The first book to combine how-to, self-help and spiritual genres to address the needs of millions of readers as they strive to detach from the Culture of Chaos and embrace a life of balance. It is through this inner harmony and balance that one may then create a meaningful, authentic reality. With a down-to-earth approach, the reader is guided through the process of emotional healing and renewal of spirit through the familiar analogy of housekeeping: cleaning, organizing, and “airing out” our lives, room by room, task by task.

What Advice Would You Give Aspiring Writers?
Never give up. I was rejected many times before I was able to find an agent and a publisher for my first novel, but I finally did, and The Book of Obeah went on to win an award and it has recently been optioned for film.

Author Bio:
Sandra Carrington-Smith is an Italian-born author who relocated to the United States in the late 80’s after marrying a US soldier who was serving overseas. Although writing was Sandra’s deepest passion since childhood, her dream of becoming a published author had to be placed on hold for several years. Moving to a new country provided several challenges, the biggest one being the language barrier she encountered when she first arrived. In order to become fully integrated, Sandra tapped into her love for reading, and over time her vocabulary grew extensively. She gave birth to three children and devoted most of her time to raising a family. By the time she was in her late 30’s, Sandra decided to revisit her old passion for writing, and penned a novel of paranormal suspense, The Book of Obeah, followed by a self-improvement book, Housekeeping for the Soul: A Practical Guide to Restoring Your Inner Sanctuary. Both titles were sold to the same publisher and released in 2010, and The Book of Obeah went on to win an international book award. The Book of Obeah has been optioned for film, and production is expected to start early summer 2013. It will also be released as an audio book in the second quarter of 2013 by Cherry Hill Publishing, and narrated by Dave Fennoy, better known as the Hulu Guy. Currently, Sandra is working on two new novels: Shadows of a Tuscan Moon and The Key. Killer in Sight (A Tom Lackey Mystery) was released in May 2012, and The Rosaries (sequel of The Book of Obeah) was released in December 2012. Sandra Carrington-Smith lives in Raleigh, NC, with her husband, children and four cats.

What Inspired You to Write Your Book?
Housekeeping for the Soul offers a fresh approach to healing and self-improvement through the power of faith and positive thinking. Looking at things from a spiritual perspective allows one to see a rather different picture.