You are here: Home / Non-fiction / Humor / Hotter Than Ever by Linda Cousine @LindaCousine

Lexi Taylor had the picture perfect life—beauty, fame, a loving family, and a long-standing contract as the face of an international cosmetics line. But after Lexi hit the big five-o, menopause moved in and her husband moved out, … followed by her friends, her figure, and her modeling career.

Scoring illegal hormones across the border, and dating a man half her age can’t keep Lexi on the straight and narrow, and after she’s arrested for a moment of menopause-induced madness, a family intervention convinces Lexi she need some professional help. With the efforts of one hot and sexy doctor and one very therapeutic nun, Lexi manages to reclaim her sanity, her self-respect, and her sex life, and learns that menopause might just have helped her to become the woman she was always meant to be.

Targeted Age Group:: women 35 and over 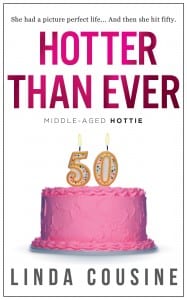 How is Writing In Your Genre Different from Others?
Think of me as the older, American, Sophie Kinsella who deals with menopause instead of chronic shopping, or the younger, more ethnic, Janet Evanovich, not intelligent enough to write a who-done-it.

What Advice Would You Give Aspiring Writers?
At ten, I knew I wanted to be a writer. At fifty, I finally picked up a pen, (literally, as I often write my first draft longhand) and I wrote six books in four years. My advice? IT IS NEVER TOO LATE TO START!! My other advice is to share the words of Audrey Hepburn. “Happy girls are the prettiest.” And nothing makes a writer happier than writing– so get to it!

Author Bio:
Linda Cousine is a writer who tells people she holds a Master’s degree in menopause and a B.S. in BS. When she isn’t standing in front of the freezer or taking ice baths, she can be found at her computer writing something with the word “Hot.” She lives in Orange County, CA with her husband, and a dog named Dude. Too Hot to Hold is her second novel. For more information on her upcoming books visit her website at www.LindaCousine.com

What Inspired You to Write Your Book?
Nothing brings more terror to the heart of a middle-aged woman than the thought of impending menopause. But take a former beauty queen now more tarnished than her old tiaras, and you’ll get a sense of what I felt when menopause hit me.

Once the horror of my diagnosis wore off, (and the ill effects from all those dirty martinis used to soften the blow) I decided to share my journey, albeit satirically and within the guise of my alter ego, Lexi Taylor, a fading super model struggling to keep her life, her looks, and her libido on track in the face of impending menopause. Thus began the “Middle-Aged Hottie” book series, a funny fictitious romp into the world of menopause. Hotter Than Ever, the first in the series, debuted in the fall of 2012, and Too Hot to Hold is now available through Amazon. Hot to Trot and Hot and Bothered will follow.

My personal journey took me from the abused housewife of my twenties and thirties, to the happy, outspoken fifty-five-year-old, brave enough to model Bedazzled Depends diapers for my weekly YouTube channel, www.youtube.com/user/hotLindaCousine where I give tips on aging gracefully, and embarrass the heck out of my children and grandchildren in an effort to “tell it like it is.”
I like to think of myself as the aging beauty queen who survived the minefield that is menopause, bruised, but not broken. And the woman who when life gave her lemons—made herself a whisky sour.