You are here: Home / Fiction / Romance / Hopes and Dreams and Other Useless Things by Shan D. Lang 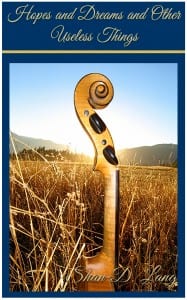 Survive. Persevere. Those are the only two things Ana Warrick knows how to do anymore. After losing her parents as a teen, raising her sister, and barely surviving an abusive marriage, Ana is determined to start over, to give her sister, Leah, the life Ana had never known. So she hops on a bus one day, with her sister in tow, and makes her way across country to Cedars Bloom, Texas, the only place that’s ever felt like home.

Twelve years is a long time, but the moment Ana arrives in Cedars Bloom it feels like she never left. They had been happy there once, if only for one brief month, and for a while Ana believes that they can have that again. Not even Cade Rambert, the grouchy and distrusting cowboy she meets their first day back can deter her from starting over and making Cedars Bloom home. Determined to simply avoid Cade and ignore her growing feelings for the man, Ana tries to distance herself from him. Fate, on the other hand, seems to have other plans as they find themselves thrown together again and again. Ana wants to believe in second chances, but is the risk worth it?

In Cedars Bloom, Ana finds all that she’s been looking for in life: a home, friends, family. But when Ana’s past follows her to town, the consequences prove dire, and once again she’s reminded that hopes and dreams aren’t meant for people like her. After all, hopes and dreams are just useless things, aren’t they?

What Advice Would You Give Aspiring Writers?
I would encourage writers to join with communities of authors to share, to learn, to grow. Finding the will to sit down and write was easy for me, but it was my resolve to publish that wavered back and forth. Author circles, blogs, and forums helped me see that I wasn’t the only one with doubts. Get out there!

Author Bio:
As a young adult, I hovered somewhere in the shadows of everyone else’s reality. Shy and insecure, I disappeared into obscurity, content to watch from the background as those who sought the dreaded spotlight basked in those unforgiving beams. I found solace in the shadows because in them I existed, the known not just the seen. My own reality, then, was far better than everyone else’s because in darkness there was truth, in light only illusion. Books, I found, epitomized this paradox. To me fiction captured the intricacies of human nature, the light and the dark, the truth and the lie. To me it seemed fiction could be truer than reality. This was the ultimate paradox, and I wanted to explore it.