You are here: Home / Fiction / Hooligans by Chaz Fenwick 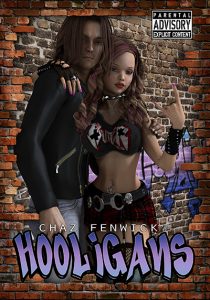 The Metalheads – Heavy metal music, partying, drugs, alcohol and sex are the only things that matter to this subculture of teen misfits. When the hottest rocker chick in town, Trisha Williams, is thrown a 16th birthday bash at her father’s house, things take a turn for the worst. The notorious Westside Gangstas, a criminal gang feared for its ruthless street thuggery, gatecrash the party. A brawl erupts and popular teenager Dayne Hetfield is caught having sex with a gang member’s girlfriend. This begins the cycle of tit for tat violence that turns the streets of urban Sydney into a battleground. Friendships become strained and relationships are broken as the beatings, bloodshed, bombings and murder take their toll on Dayne and his metalhead mates. Yet, neither side is willing to submit to the carnage, and the animosity rages on until only one side is left standing.

Note: If you do not like excessive violence and vulgar language than this book isn’t for you.

What Inspired You to Write Your Book?
The idea to write a story that featured metalheads came from many sources such as my own heavy metal obsession and teen years. The most influential was a book I studied in high school called, “The Outsiders” by S.E. Hinton. It was probably the only book in high school that I actually finished. The story featured two feuding subcultures, the greasers and socials, two teen groups with vastly different upbringings who often came into conflict with each other.
The greaser’s lifestyle was fairly similar to a metalheads and that really appealed to me as a teenager. While my teen years weren’t as violent as the events in Hooligans, there were instances where us metalheads would go to parties and be targeted by other groups just because we didn’t look the norm. So, I wanted to take the whole subculture conflict idea and craft a more modernised story of my own that centred on teenagers of the heavy metal/ metalhead scene.

How Did You Come up With Your Characters?
The characters from Hooligans are a mixture of friends and the more memorable acquaintances of my teen years.

Book Sample
Tanked chicks danced on a coffee table, spraying their cheap wine everywhere. Metallica’s song Whiplash blasted from the stereo system, keeping the party goers psyched. The teenage crowd paid no attention to the boys’ entrance, fully mesmerised by the hype of the guitar shredding tune. Wally lived for these nights; he had nothing else. Belonging to the “Metalhead” sub-culture gave him a family. That song, the album – he absorbed those blitzing guitars and screaming vocals. Heavy metal music – he lived and breathed it. His life revolved around it like all metalheads at the party.