You are here: Home / Bargains and Freebies / Bargain Books Under $3 / Hidden Obsession: Watching Her Every Move by Alicia Stills 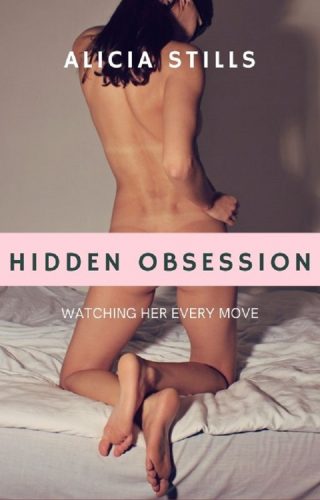 David has been following her for so long, he feels as if he knows her every move. How long can he bear to do nothing more than watch?

Keeping a watchful eye on her from a distance has been a game for him, and one that he’s greatly enjoyed. She’s beautiful, charismatic, and, quite possibly, out of his league. He sometimes thinks he could admire her beauty forever.

But now, he’s ready for more. One way or another, she will be his tonight.

However, when he decides he’s going to pick her up at the bar, he ends up learning that he may not know her every move after all. Pushed to the side and relegated to the shadows once more, he finds himself trapped in a front row seat as she allows a better man to take her instead.

Unable to escape, but unsure if he wants to, David watches her every move and wonders if he’s found a new obsession.

This book contains mature themes relating to voyeurism, exhibitionism, and multiple partners and is intended for mature readers.

What Inspired You to Write Your Book?
I was inspired to write this book as a way to express one way that individuals can explore exhibitionism and voyeurism play, combining small aspects of my real life experience with fantasy. I wanted to stay true to my normal form by creating characters and situations that – while definitively fantasy – tried to maintain a steady relationship with realism. In the end, I think I've succeeded in creating a sexy story with relatable characters and a little bit of suspense.

How Did You Come up With Your Characters?
When I came up with my characters, I knew I wanted to have a stereotypical guy that single women enjoy picking up on a night out on the town. Sexy and arrogant – the kind women have a tendency to text later when they've had a few drinks and are looking for a booty call, but wouldn't want a real relationship with.

As for the other two characters, the focus was always going to be on them and I wanted to be able to interchangeably tell the story from their perspectives. I wanted two characters that would remain largely representative of two regular individuals at comparable points in their lives who could be easily imagined by readers of any gender.

It was dark, save for a sliver of light cutting sharply into the room through a crack in the bedroom door. Not enough to light the inside of the closet, though, leaving him to sit in darkness, unable to do more than steady his eyes on the strip of light running along the carpet on its way to the foot of the bed. All he could do was strain his ears against the silence and fixate on the light, hoping for any indication that she had returned.

He knew her schedule as well as anyone. Better, actually. Perhaps even better than her. He knew the sound of the garage door opening would rattle through the house soon. From there, he would have ninety seconds, give or take a few, before she made the short trek down the hall and into the bedroom. That’s when his real work would begin.

He had fantasized about doing this so many times before, but he had never been this nervous in his fantasy. Now that he was actually crouching, the silence and the shadows his only companions, it finally felt real. Real enough to make his thoughts race so quickly that everything felt like a blur.

Still, even through the blur, he knew that if he were going to be discovered, it would be right away. A wandering eye taking in the room, peering through a crack in the closet door before locking in on him. He had to stay still and silent, right up until it was time to make his presence known. If he were to be discovered prematurely, it would make things… uncomfortable, to say the least. And not at all how he wanted this night to unfold.

But as he sat back in the darkness, his nerves only made him more excited. His heart raced and his breathing was heavy and uneven, both seeming to echo loudly around inside of him as he listlessly ran his fingers along the silken material inside one of the plastic tubs stacked next to his body. He didn’t need to open the drawer to know it was where she kept her lingerie. He knew before he entered that night, but the texture of the most intimate clothing she owned left little doubt about what he was touching. The smooth fabric felt nice on his skin. As nice as her skin would feel on mine, he thought.

The mechanical sound of turning gears opening the garage door made him jump. Images of her body bending to his will were shoved from his mind, replaced by a picture of himself in her kitchen, clearly positioned to watch her walk in. When he closed his eyes, he could clearly envision what she looked like. Straight, shiny brown hair that she wore down, tan skin, lean, athletic body. She was wearing the skin-tight jeans and low-cut black top from earlier that day, still showing off just a hint of her stomach and an inviting amount of cleavage. By the time he heard the door open, he was already hard. Everything had been building up this for a long time. As he anxiously waited to hear her again, he realized that he needed this buildup. Touching her later wouldn’t be nearly as satisfying without it.

As he listened in anticipation, he finally heard what he had so desperately been waiting for. Her voice carried into the bedroom, buzzed, light, and flirty. As beautiful as ever, he thought to himself. But there was something else there, too. There was too much movement for it to be just her, and she wouldn’t be talking to herself. The blood had already drained from his face before he heard him speak.

His voice was deep and masculine. When he heard it respond to her just beyond the bedroom door, he sat back deeper in the closet, certainly not wanting to be discovered now. He knew it had been possible that she wouldn’t return alone. There had always been the chance of that. He just couldn’t believe tonight was the night she brought home company.

As more light from the hallway spilled into the bedroom, he could see her again, finally. She was a welcomed sight, even as she was leading a new man to her bed. A tall, muscular man that would certainly tower over the one hiding in the closet.

Trapped, and almost too nervous to breathe, he had nothing to do but wait.

Links to Purchase eBooks – Click links for book samples and reviews
Buy Hidden Obsession: Watching Her Every Move On Amazon