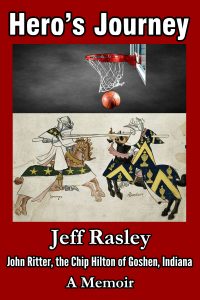 What inspired you to write your memoir?
I heard rumors that a childhood hero of mine had become a homeless drunk. I wanted to find out what happened to him and why. And, I wanted to share my memories of him and why I still think of him as a hero.

What makes a real hero?
Chip Hilton was an ideal hero for boys growing up in small Midwestern towns in the 1950s and 60s. Chip was the best athlete at his school, an A-student, loving son, and hard worker at the local drug store. He had a gang of loyal friends and was the star player on his high school teams. But Chip was just a fictional character in a series of sports-action books.
John Ritter was a real-live boy who seemed to be as close to Chip Hilton-like perfection as humanly possible. He grew up in Goshen, Indiana, to become a record-breaking All-Star basketball player and captain of Bob Knight’s first outstanding Indiana Hoosiers team. After his college heroics, John Ritter’s life began to diverge from the expectations of his hometown fans. Real life has turned out much different for John Ritter than his fictional twin.
Jeff Rasley’s childhood memories of his storybook and real-life sports heroes are the launch pad for a far-ranging study on how we create, treat, and mistreat our heroes. Hero’s Journey taps voices as diverse as Patti Smith, Homer, Shakespeare, the Grateful Dead, and Dennis Rodman in an examination of the cultural shifts in the meaning of hero. The lustrous triumphs and pitiable travails of mythical heroes, like Achilles and Lancelot, are compared to ethical martyrs, like Gandhi and King, and to more troubling champions like Allen Iverson, Mike Tyson, Caitlyn Jenner, and Donald Trump.

The term Hero has been trivialized by its excessive use in popular media. Reporters refer to all veterans, cops, and firefighters as heroes. They will even call victims of terror heroes. But the media also delights in scandals that reveal our heroes to have feet of clay.
The mythologist Joseph Campbell, building on the work of Freud and Carl Jung, explained how archetypal heroes are created in myth and out of legends. Hero’s Journey discusses how the Hero Archetype has influenced contemporary culture and how the meaning of hero has been transformed by recent historical and cultural developments. Interwoven into the discussion is Rasley’s memoir about his childhood heroes and the story of John Ritter’s hero journey.

Our heroes exemplify the greatest human qualities and virtues, like courage, wisdom, and compassion. We will tear some of them down as false idols and knock them off their pedestals. But we need our heroes. Real heroes reveal the best in us and point the way toward a better world.

How did you decide how to publish your book and where is it published through:
I enjoy the freedom and control of direct publishing, so that was my intent from the beginning with this book. It is published by my family's company, Midsummer Books, through Amazon.

How do you see writing a Memoir as different from writing other genres of books?
It is more self-reflective. It still shouldn't be over-used, but "I" is more forgivable as the subject of many sentences.

Author Bio:
Jeff Rasley lives on the White River in Indianapolis with Alicia and Bandit. Jeff is the author of nine books. His first published writing was melancholic-adolescent poetry in the Hanover College Fine Arts Journal. Over 50 feature articles in law, travel, spirituality, and human interest followed in Newsweek, Chicago Magazine, ABA Journal, and other periodicals.

Jeff dropped out of college, saved money from factory work, then hitch-hiked across the USA. Money earned on a road crew financed travels in Europe and motorcycling from Indiana to Mexico City. Marriage and kids lessened travel time, but he leads Himalayan treks and mountaineering expeditions, has scuba dived throughout the Caribbean, and sea-kayaked in Palau, Tonga, and the Greek Isles.

Jeff’s commitment to social activism and philanthropy began in high school when he co-founded the Goshen Walk for Hunger. In law school he fought for renters’ rights and organized the first rent strike in Indiana as president of the Indianapolis Tenants Association. He was lead counsel on class action suits for prisoners which resulted in the construction of two new jails in Central Indiana. Jeff was plaintiff in a class action requiring clean-up of the White River after it was polluted by an industrial chemical spill. Jeff is president of the Basa Village Foundation, which funds culturally sensitive development in Nepal. He is a director for five nonprofits. He is U.S. liaison for the Himalayan expedition company Adventure GeoTreks Ltd, and teaches philosophy of philanthropy at Butler University.