You are here: Home / Fiction / Paranormal / Her Holiday Bear by Marie Mason 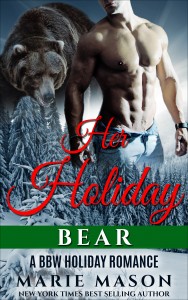 As soon as she had seen the ad for an elementary schoolteacher in Riverton, Colorado, Ally Stephens had felt a pull to the shifter town. Okay, so maybe she’d filled her head with fairy tales and hoped she’d be some shifter’s one and only. She had nothing stopping her from answering the ad. No parents. No siblings. Taking a chance, she moved to the small town–and promptly lost her heart to the town’s sheriff, a gruff bear shifter who had no use for a mate. After months of exchanging panty-melting glances and light flirtations, Ally resigns herself to being alone again for Christmas–and possibly for the rest of her life.

Bear shifter Jagger Houston was a loner by nature, both as a man and a bear. He didn’t believe in true mates, didn’t believe in love. However, he did believe in lust. He tried to convince himself—and his bear—that was all he was feeling for the curvy chocolate-haired schoolteacher who had come to town. It didn’t matter how good she tasted or how sweet she looked, neither he nor his bear wanted to be tied to someone for the rest of their lives.

What Inspired You to Write Your Book?
I love anything Christmas – so what could I love more than a shifter romance! Add in my curvy girl heroine and I hope I’ve written a book that makes you want to curl up under a blanket on a cold winter’s night and see just how hot you can get.

How Did You Come up With Your Characters?
As most writers will probably tell you, they have a lot of people running around in their heads screaming for their story to be told. My characters usually come to me on my drive to and from work, or at night, just when I’m about to fall asleep. That gets annoying, but I always listen to them.

Book Sample
Her sheriff! Jagger Houston. He stopped a couple of feet away, his black Stetson pulled low over deep set brown eyes, assessing her the way he would a criminal he was about to arrest. As always, he was clad in the form fitting gray uniform worn by the department. Taking a sweeping glance down his body, she tried to control the groan that threatened to escape. Because she did mean form fitting.

He had thick, muscular thighs, narrow hips, a flat stomach and broad shoulders, encased in a heavily lined suede jacket that looked as if they could hold the weight of the world. A large, wicked-looking knife was strapped to his waist on one side, his department issued revolver on the other. Not that the bear shifter really needed the weapons to put the fear of God into anyone caught misbehaving. His extreme height and weight, along with the gruff expression he usually wore was enough to send the devil himself running toward the nearest church to repent of his sins.

The almost coppery color of his skin along with the dark color of his hair revealed the Native-American genes in his DNA. While her hair was a medium brown, his was closer to a midnight black. Of course, shifters were notorious for being as handsome and beautiful as sin. Not an ugly one to be found as far as Ally could tell. On Jagger, the perfect features were a little rugged, but that in no way distracted her from his magnetic pull. In fact, the wildness she sensed in him drew her to him even more. She was sure other women felt the same thigh-clenching attraction.

Buy Her Holiday Bear On Amazon