You are here: Home / Fiction / Paranormal / Her Dear & Loving Husband by Meredith Allard 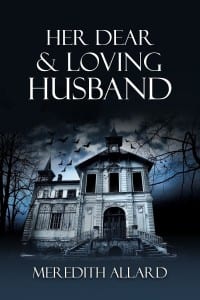 James Wentworth has a secret. He lives quietly in Salem, Massachusetts, making few ties with anyone. One night his private world is turned upside down when he meets Sarah Alexander, a dead ringer for his wife, Elizabeth. Though it has been years since Elizabeth’s death, James cannot move on.

Sarah also has a secret. She is haunted by nightmares about the Salem Witch Trials, and every night she is awakened by visions of hangings, being arrested, and dying in jail. Despite the obstacles of their secrets, James and Sarah fall in love. As James comes to terms with his feelings for Sarah, he must dodge accusations from a reporter desperate to prove that James is not who, or what, he seems to be. Soon James and Sarah piece their stories together and discover a mystery that may bind them in ways they never imagined. Will James make the ultimate sacrifice to protect Sarah and prevent a new hunt from bringing hysteria to Salem again?

Part historical fiction, part romance, part paranormal fantasy, Her Dear and Loving Husband is a story for anyone who believes that true love never dies.

How is Writing In Your Genre Different from Others?
I write in both the paranormal and historical genre, and in a way they’re exact opposite genres. In historical fiction, writers need to do quite a lot of research to make certain the facts they’re sharing with their readers are correct. In paranormal fiction, my imagination is the limit and I’m not held down to things like facts or research. My paranormal characters can do whatever it is I imagine they can do, and I love the freedom that that allows.

What Advice Would You Give Aspiring Writers?
Really, my best advice for anyone who wants to write anything is to take your time learning —find your unique voice and figure out what you want to put out into the world. Reading, if the writer has done her job, should be easy, but writing isn’t easy.

Author Bio:
Since 2000, Meredith Allard has been the Executive Editor of The Copperfield Review, an award-winning literary journal for readers and writers of historical fiction. She received her B.A. and M.A. degrees in English from California State University, Northridge, and she has taught creative writing and writing historical fiction seminars at Learning Tree University, UNLV, and the Las Vegas Writers Conference.

Her short fiction and articles have appeared in journals such as The Paumanok Review, Moondance, Wild Mind, Muse Apprentice Guild, Writers Weekly, CarbLite, and ViewsHound. She is the author of the Amazon Best-Selling Loving Husband Trilogy, as well as the historical novels Victory Garden, Woman of Stones, and My Brother’s Battle. Victory Garden and Woman of Stones have also been Amazon Best-Sellers in the Historical Fiction and Religious Fiction categories.

What Inspired You to Write Your Book?
A student handed me Twilight (this was in 2008) and though I wasn’t into vampires I read it because she raved about it. After I read the Twilight books, I started watching True Blood, and from there I started reading Anne Rice, Charlaine Harris, and of course the standard in the genre, Dracula by Bram Stoker. After I had a brain full of vampire, a story about a vampire still mourning his long-dead human wife occurred to me. I kicked the idea around in my head for about six months, and then I decided to see if there was anything to this crazy idea. From the moment I started writing I never looked back because the characters and the story took over. Originally, I didn’t have any intention to write a piece of historical fiction, which is odd since historical fiction is the genre I’m most associated with, but once I decided to set the story in Salem, Massachusetts I knew I had to incorporate the Salem Witch Trials somehow. The story travels back and forth between Salem during the witch hunts and present-day Salem. This isn’t a blood and guts vampire story. It’s a love story, and James is a very human vampire. You could say the vampires act as a metaphor for any group of people deemed to be different by the general society.