You are here: Home / Fiction / Women's Fiction / Hello, My Love by Evy Journey 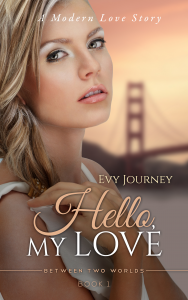 Bright, beautiful law student Elise Halverson looks forward to a promising career. The last thing she needs is an attraction to well-known playboy Greg Thorpe. Besides, he’s about to get married, which means he’s off-limits.

Distrusting him, Elise tries to keep away. But Greg finds Elise so unlike the women he used to be with and falls for her.

They butt heads at her parents’ dinner parties. She’s surprised to find he’s intelligent and funny; and she can’t help feeling drawn to him.

The night before his wedding, they give in to what they both want, with consequences that keep them heartbreakingly apart. Intent on punishing him, Greg’s jilted fiancée strikes back.

Two years later Greg and Elise reunite but they find it’s not so easy to live together. For one, Greg is in for a surprise. Then, his former fiancée comes back and trouble returns to haunt Greg and Elise again. Can they ever find a way to their happy-ever-after?

This modern-day pastiche of Jane Austen novels is a delicious romance with a literary slant, spiced with a twist of whodunit. It is Book 1 of the family saga, Between Two Worlds, but has been written as a standalone.

What Inspired You to Write Your Book?
Quite simply, it was an urge after years of reading and rereading Jane Austen. I also needed to purge myself of “academisms” from writing a lot of research reports. For that second reason, this book wasn’t easy to write. I still struggle with that problem.

How Did You Come up With Your Characters?
Characters like Jane Austen’s Elizabeth Bennett and Emma Woodhouse, and Elizabeth Gaskell’s Margaret Hale inspired the “making” of Elise Halverson. I imagined what they would do now if they had been born today. The female protagonists of those novels have always been the focus of those two feminist writers. Of course, their men were essential and each couple helped each other grow.

Book Sample
Elise stared, with lids drooping over glazed eyes, at the newscaster on television, while she nibbled on some take-out falafel from a neighborhood restaurant. But as bright as that pita tasted, with her favorite spicy filling of bean balls, she could not relish it although she was famished.
What she wanted was rest. She needed more of that than what she could stuff into her mouth and her stomach. She plopped the remaining falafel on the coffee table in front of her, and slid her body, weary and heavy, down on the supple seat cushions.
The last two weeks had been hectic. She was exhausted from running around during the day—interviewing witnesses for her first big case—and working late in her apartment. She had devoted her nights to reading and analyzing transcriptions of interviews and depositions. This evening was not going to be any better.
Sweet, glorious slumber soon took over. But not for long.
Insistent ringing jarred Elise for an instant out of the thick fog in her head. She stirred, but she could not move her limbs. She slid back into another fitful dream.
The ringing began again. How long after the first, she could not tell. She groped for the phone on the side table behind her head.
“Hello.” Elise slurred, still dazed from sleep, her eyes closed.
Her greeting was met with silence.
“Hello?” she said once more.
“Hello. Do you remember me?” The voice that answered was deep and resonant, one resurrected from her past.
Elise sprang upright and swung her legs off the couch. She switched on the lamp on the side table. Now wide-awake, she reached for the remote control and turned off the television, still blaring the same headlines about the uncertain economy and businesses continuing to fail.
Did she remember? How could she forget? Not a week passed when that voice did not speak, answering one question or another, on the radio, on television, or merely in her head.
No, she had not forgotten. How could she? But she never expected that voice to address her again. It had been two years, after all, since they were last together, and one year since she had given up on him.