You are here: Home / Fiction / Mystery/Suspense / Healing The Dead by D. F. Bailey 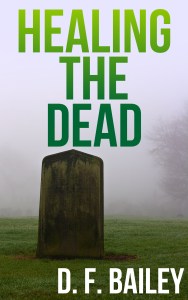 “You start reading Healing the Dead with a gasp and never get a proper chance to exhale.”
— Globe and Mail

A child is shot in a game of Mob

When David captures the accidental shooting death of his best friend on film, the Sykes family is torn apart by guilt, isolation and a terrible inability to love. Who to blame? Who can save them?

Their world is thrown into chaos

Children of ambitious parents, Jayne, Rose and David Sykes struggle to assert their individual identities in a world they believe is confused at best, brutally hypocritical at worst. Through the turbulent 1960s — as they move from Toronto to New York City — they struggle to keep their family intact. One by one, each must confront the emotional debris that threatens to break through their carefully constructed defenses.

Love offers the only salvation

Ultimately, the hand of love is extended to David. But can he embrace it? Powerful and disturbing, Healing the Dead is an unforgettable story of the search for salvation in the rapidly changing morality of the 1960s.

What Inspired You to Write Your Book?
D. F. Bailey talks about Healing the Dead.

Q: We hear so much about childhood shootings, how did this particular story come to you?
DFB: When I was twenty-five I took my first job as an English teacher in the resort town of Qualicum Beach. There I met a young girl. She was very pretty but quiet to the point of being distracted. She seemed almost haunted. She enrolled in my grade eight class and gradually I began to learn about her background.

Q. Haunted? What had happened to her?
DFB: She’d been playing cops and robbers with the neighborhood kids. One of the other children produced a gun to serve as a prop. The young girl grabbed it, and in all innocence fired the pistol and killed her playmate.

Q. Your novel covers the period from 1956 to 1969. Why take so long to play out her story?
DFB: Because the story only begins with the fatal shooting. Over the next fifteen years I managed to stay in touch with my student, saw her grow, mature and eventually have her own baby. Through it all I could see her struggle. That early impression I had of her, the distraction, lingered and shifted but it never dissipated. She knew that I knew about her tragedy, but we never discussed it. I had the impression that mere mention of it would shatter her.

Q. Why does the novel begin in Toronto and then shift to New York City?
DFB: Two reasons. First, my family moved from Canada to New York City and the family narrative in the novel parallels my own. Second, I wanted to set the tragedy of the novel against the backdrop of New York in the 1960s — the most turbulent time and place in my life up to 2001.

Q. Parts of the novel are disturbing; was it difficult to write?
DFB: It was a difficult story to tell, but I kept my finger on the pulse of it by remembering this young girl. If she could bear this weight, I thought, so can I. Writing this story was my way of comforting her, of helping to bear her suffering. If readers are affected by it, perhaps it will motivate them to secure their guns and make their neighborhoods safe for children.

Q. There’s also a love story in the novel. How does it fit in with the overall tragedy?
DFB: This is a coming-of-age novel, and David’s romance with Sandra becomes a part of his solution to the problems of the book. In this case love IS the answer to grief and despair. However, David has to earn this love — but I don’t want to spoil the ending for readers!

How Did You Come up With Your Characters?
Q: The central character in the novel isn’t the girl, but David, her brother. Why the shift?
DFB: My student became a character I named Rose and I adopted the personna of David, the youngest child in a family of five whose upwardly mobile trajectory was cut short by the shooting death. David has to grapple with the tragedy, too — as do his parents and his second sister, Jayne. There are ripples after ripples after ripples. I wanted to reveal the complex currents swept forward by such a simple accident.

About the Author:
D.F. Bailey’s first novel, Fire Eyes, was a finalist for the W.H. Smith First Novel Award. A second novel, Healing the Dead, was translated into German as Todliche Ahnungen. This was followed by The Good Lie, another psychological thriller, now recorded as a talking book. A fourth novel, Exit from America, made its debut as an e-book in 2013. D.F. Bailey is currently working on a series of novels narrated from the point-of-view of a crime reporter in San Francisco. In the off-hours he works on some non-fiction meditation guides, grouped under the banner of White Light Meditation.

Following his birth in Montreal, D.F. Bailey’s family moved around North America from Ontario to New York City to McComb, Mississippi to Cape May, New Jersey. He finally “landed on his feet” on Vancouver Island — where he lives next to the Salish Sea in the city of Victoria.

For twenty-two years D.F. Bailey worked at the University of Victoria where he taught creative writing and journalism and coordinated the Professional Writing Cooperative Education Program — which he co-founded. From time to time he also freelanced as a business writer and journalist. In the fall of 2010 he left the university so that he could turn “his pre-occupation with writing into a full-blown obsession.”