You are here: Home / Non-fiction / Personal Growth / Happiness as a Second Language by Valerie Alexander 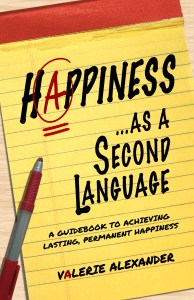 The Ultimate Happiness “Textbook” for Everyone!
If you weren’t raised speaking Greek, would you expect to leave home and instantly be fluent? What about Swahili? Dutch? Japanese? Which begs the question: If happiness wasn’t practiced in your home growing up, how would you expect to know it now?

If you’re trying to teach yourself how to be happy in your daily life, stop thinking of happiness as an emotion you need to constantly control and start thinking of it as an instinct you can work to develop — like the language you naturally speak.

Happiness as a Second Language teaches happiness the same way you would learn any language that wasn’t spoken in your home. It starts with the most basic practices of being happy, then turns to more complicated techniques, and ultimately to advanced concepts.

Using this book as your guide, you will learn:
How to introduce yourself as happy
How to “count to five” in Happiness
The verbs, nouns and adjectives of Happiness
Happiness in the past, present, future and “future uncertain” tense
How to overcome those who actively try to negate your happiness
Key phrases in your new language, and
How to work past the setbacks that happen when learning anything new
Being happy is completely within your reach, but you have to do the work to get there.

This book is the ultimate textbook. The writing is simple and straightforward, the instructions easy to follow, and the sample situations are familiar, touching, often heartbreaking and sometimes hysterical. Start now, and you will be fluent in Happiness before you know it.

What Inspired You to Write Your Book?
My husband and I were going through an extraordinarily difficult time and he commented on how amazing it was that I remained so happy throughout. I replied, “And it’s not even my native language.” Thus, the book was born. The idea is that if we can learn to speak a different language than the one we were raised with, we can learn higher levels of happiness than what we were raised with.

When you master the act (and art) of Release, you will be well on your way to being fluent in Happiness. One of the most important steps in being happy is ridding yourself of the things that make you unhappy. Whether it’s beating yourself up over an incident that didn’t turn out as you would have liked, or holding a grudge against someone who wronged you, or blaming the universe when things don’t turn out your way, the negative weight of past unhappiness can really inhibit your ability to be truly happy now.
Release as a verb is distinct from “forgive.” I find forgiveness to be a much greater challenge, and as applies to what you want – happiness – forgiving is not required.
Let me make the distinction clear, so you can begin the act of releasing. Imagine something horrible happening to you or a loved one at the hands of another person. Everyone has their own sensibilities, so think of what, for you, would cause the most unimaginable heartbreak. Now, think about what it would take to forgive the person who committed that act.
I don’t know about you, but I am simply not capable of that level of forgiveness. I am not Jesus, Gandhi, Buddha, Martin Luther King, Jr., the Dalai Lama or any other great spirit who can achieve that kind of transcendence.
I am an average woman, born on the East Coast, raised in the Midwest, matriculated in Texas and now living in Los Angeles, and I can’t even forgive the duplicitous jerk who betrayed my husband in a business deal four years ago, much less someone who would do serious harm to my family. But I can be happy, even in a world where those people exist, because I can release my hatred for them. I can take a moment and feel it leaving my body.
I don’t forgive the people who have hurt the ones I love – they are not absolved. However, their past or current behavior does not have to control me, or my emotions. You don’t have to forgive to stop being angry, you just have to release.
And much like the act of remembering, releasing can be tiny. Don’t just release the overwhelming emotions from being victimized or deeply harmed, but every wrong done to you, either by others or by you, yourself. When you feel the buildup of resentment, anger, frustration or whatever clouds your happiness, target where it’s coming from and simply release it. Releasing is a physical act. Stop and feel it happening.
Is the person in front of you at the drive-through taking far longer than he should when you’re already twenty-two minutes late to pick up your daughter? How does it feel, sitting here getting angry at him, or at yourself for being in this situation? Make a quick decision about whether you can change your circumstances and if you can’t, sit back and release.
This realization of our need to release things in this way came to me one day at the dog park. Actually, it was screamed in my vicinity. A woman was trying to get a toy away from her dog, and with her holding one end and the dog firmly gripping the other between his teeth, she was shrieking at him, “Release! Release! Release!” I watched as her sheer rage built, and it occurred to me that any vestige of happiness she might have gotten from bringing her dog to the park was long gone, and no matter what else happened, she was not going to get it back.
She had so much invested in getting the dog to give her the toy, but what if she had just let it go, actively Released her own need to be…I don’t know…obeyed? Respected? Dominant? Would the outcome have been different? She still would not have gotten the toy, but she would have been happier, or at least more able to respect herself.
When the shrieking got to be too much (and our pity for the poor dog reached its peak), a dog park regular who is always equipped in such situations trotted over and asked if he could give the stubborn animal a treat. As soon as the liver nuggets appeared, the dog instantly dropped the toy and the woman snatched it up. Even if that moment gave her a small rush of victory (she wound up with the toy, after all), I can’t imagine that she felt all that happy. How could she?
Try this – when you feel yourself getting agitated, depressed or even resigned to failure, stop and ask if there is something you can release that will leave you feeling closer to happy. Release the judgment you pass on yourself for being in this situation. Release the anger you are aiming at the person you think is responsible for your negative mood. Release the grudge you are holding against anyone whose past behavior might have caused your current reality. Release begrudging the victor, simply because it is not you.
You don’t have to forgive. You don’t have to forget. You simply have to lean back and feel the unhappiness leaving your body as you Release.

About the Author:
Valerie Alexander is the author of “Happiness as a Second Language: A Guidebook to Achieving Lasting, Permanent Happiness,” and the forthcoming book, “Success as a Second Language: A Guidebook for Defining and Achieving Personal Success.” She is a writer, wife, filmmaker, mentor and tour-guide through life. She can be reached through her website, SpeakHappiness.com.

As a highly sought-after speaker, Valerie lectures at colleges, graduate programs and film schools across the country with her entertaining talk, “How Women Can Succeed in the Workplace (Despite Having Female Brains),” and at conferences, corporations and networking groups with her inspirational “Speak Happiness!” series of workshops and keynotes, helping companies, managers, employees, entrepreneurs, artists and others stay positive, move forward, lower costs, increase productivity and maximize profits by making happiness a priority.

Valerie started her career in the Silicon Valley in the late 1990s, where she worked on some of the most important transactions of the decade as a securities lawyer, an investment banker and an Internet executive.

From 2000 to 2001, she returned to Indiana to care for her mother, and in her absence the Internet bubble burst, leaving her no choice but to move to LA to write and direct movies.

As a screenwriter, Valerie has worked with Joel Schumacher, Catherine Zeta Jones, Barry Sonnenfeld, Ice Cube and others. Not satisfied writing scripts that never got made, she co-wrote, produced and directed the award-winning short film, Making the Cut, as well as numerous commercials and PSAs.

Valerie received her B.A. from Trinity University and her J.D. and M.S. degrees from the University of California, Berkeley. In the spring of 2010, she was invited back to Berkeley Law to teach the legal ethics seminar, “Representation of Law in Film.”