You are here: Home / Fiction / Halfway to Uncertainty by Anthony 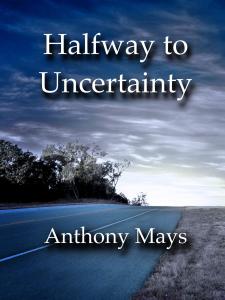 Dwight Morris and his boyhood friend, Colin, formed a business partnership that quickly made them millions. On a vacation fishing trip to Miami, Colin unwittingly came into possession of Colombian cartel financial matters which eventually led to his death.

Unbeknownst to Dwight, Colin had used his computer skills to encode the information and attach it to their company software. With cartel operatives in hot pursuit, Dwight found himself caught up in a twist of fate that threatened to ruin his company unless he followed the instructions of a mysterious benefactor.

Uncertainty thrived in every move Dwight made. After going on a maddening run throughout the United States, he finally met his secret supporter. They teamed up to try and break the code that Colin so cleverly hid and soon learned they were in competition with the cartel for the same information. In over their heads, their quest ultimately forced them to partner with an investigator of the United States Treasury.

What Inspired You to Write Your Book?
My wife, Sherry, is my greatest supporter and her belief in me keeps me wanting to write.

How Did You Come up With Your Characters?
Most of my characters are derived from my travels and life experiences. I have a tendency to instill some qualities in my characters that are from people I already know or who I have come into contact with over the years.

Book Sample
“Charlie, this is Darby. I need your help; I’m in Miami. I think I can get out of here, but I’ve got to go underground. Is that sailboat, Shrimp Toes, available? It’s where? You gotta be kidding me…f-ing California! Dammit, I’ll find it…what was the name of that bay? Look, I gotta hang up, I got the cartel on my ass and a billion dollars plus in my pocket. I’ll call you when I’m in a better location.” Darby then heard a cough from the stairwell above. He looked up three flights of stairs and saw Colin’s face staring down at him. Returning his gaze, Darby covered his wound with his coat and quickly departed the stairwell going into the parking garage.
Colin was scared to death, but at the same time, he was exhilarated beyond belief. Nothing could have prepared him for this day. The fact that he almost lost his life, never seemed to enter his brain. He wasn’t wired like most people.

About the Author:
Anthony Mays was born and raised in Pennsylvania. He went into military service at the age of seventeen and retired after serving twenty years. He subsequently completed his bachelor’s degree in Broadcast Journalism from the University of Nebraska at Omaha. Being too young to stop working, he made a second career in the U.S. government, enjoying positions for both the Internal Revenue Service and the Department of Veterans Affairs from which he retired again. With his wife, Sherry, he enjoys life with their three children and their significant others, and four blessed grandchildren. They enjoy vacations with the families, but have a special affinity for beaches on the Gulf Coast and Florida. Now, he is excited to begin a third career writing fiction. Halfway to a Southern Heart was his first endeavor into a series he plans to write using the “halfway” theme. He recently completed ‘Halfway to Uncertainty’ and is compiling notes for his third novel, “Halfway to the Truth’.