You are here: Home / Fiction / Historical / Halfway to Magnolia House by Anthony Mays 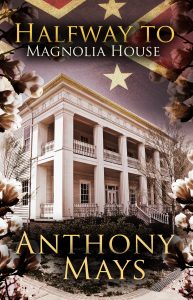 Laura Wingate’s life in New York City was falling apart. The man she wanted to marry could not commit, and her job as a museum exhibitions manager was growing stale. Needing to reexamine her life, she packed up and temporarily returned to Magnolia House on the outskirts of Alexandria, Louisiana. A place she had shared many happy days with her grandparents.

Along the way, Laura met Kendrick Reynolds, a Hollywood Director, and learned he was preparing to direct a movie, in and around Alexandria, based on the American Civil War’s Red River Campaign. She soon became enchanted by Kendrick, but a forgotten high school classmate competed for her attention, putting Kendrick in danger.

With film production underway, Laura became intrigued by the historical events of 1864, and the rumors about Magnolia House’s involvement with the Underground Railroad. An artifact she discovered in the attic suggested the rumors were not unfounded, but she could not decipher its meaning. When her two suitors accidently stumbled across the evidence she was looking for, they put aside their differences, and made a pact to keep it from her. Little did she suspect, the past was going to collide with the present and change her forever.

What Inspired You to Write Your Book?
Although born and raised in Pennsylvania, I seem to have a strong pull to things of the South. I accidently came across the Civil War’s Red River Campaign which took place in the heart of Louisiana, and was particularly intrigued by the f act that a large Federal naval force navigated the river. Not a Civil War buff by nature, I wanted to write a modern story that incorporated that area’s Civil War history. My hope was to maintain a balanced approach to the Civil War elements, while plotting a storyline that would appeal to both men and women.

How Did You Come up With Your Characters?
I use my wife to introduce my characters. As a reader, she has a good appreciation of what names would work best and she helps to define the roles they play in the story. I try to not have many characters in my books, but there are always those minor characters that are unavoidable to include in the project in order to make the whole project work. It’s not as easy as one would think to decide on main characters, because these are the ones that you are going carry the load and you want them to be believable.

Book Sample
Chapter Seven
(Magnolia House, Alexandria, Louisiana, June 3rd)
Turning onto the driveway, Reese couldn’t help but to admire the stands of magnolia trees that framed the roadway to the house. Moving closer to the American Greek Revival home, the branches of the trees began to part, revealing the magnificence of the four-columned, two-story structure. The approaching scene was indicative of a picture one might see in Southern Living magazine.
Laura sensed Reese’s awe of the view as fond memories of her childhood flooded back to her. “Looks great don’t you think? But as we get closer you’ll notice she needs a little work,” said Laura. “The roof needs to be redone, the exterior repainted, and maybe some updated landscaping, but it still strikes a pose.”
“I’ll say! I’m recalling some of the stories you told me about the property when we were in college, but seeing it firsthand, I now understand why you were so exuberant in your descriptions of it. Is this house on the national registry?”
“Yes, it was built in 1859 by Samuel Rubens, a doctor, who relocated from Connecticut. The story goes that he was a Republican supporter of Abraham Lincoln’s bid for the White House. But with Lincoln running on a platform of banning slavery in all U.S. territories and the Southern states regarding it as a violation of their constitutional rights, he had mixed feelings about what would happen if Lincoln was elected. By the time of Lincoln’s inaugural, Rubens had formed strong relationships with many of the important people of Alexandria. So when the Southern states formed their Confederacy, he was caught between his personal beliefs on slavery and his love of Alexandria and its citizens. As it turned out, he volunteered to serve the South, but was himself severely wounded in the battle of Bull Run in Virginia and he returned home. As the War raged on, rumor had it that he had a change of heart about his Confederate beliefs and became part of the Underground Railroad in Louisiana. There were a few local naysayers who rumored he was a Northern sympathizer but, in 1864, part of the house was burnt by Union soldiers, and his friends rallied to his support. If he was involved with the Railroad, he effectively used his Confederate veteran status to keep his activities a secret.”
“That’s very interesting, Laura, but it’s only a tale that makes an old grand house seem bigger than life isn’t it?
“Not according to my grandmother. She always said she had mysterious feelings about the place. I remember when I was ten-years-old, she showed me evidence of a fire behind an attic door. She said when Dr. Rubens did the reconstruction on the home he left some of the destruction as a sign to justify his fighting for the Confederacy, though he was at odds with them on the slavery issue.”
“Did your grandparents bother to look into any of these rumors? Check records, or look for other evidence?”
“No. I don’t believe they wanted to know.”
“How about you? Doesn’t being a museum exhibitor make you curious if there was truth to the story?” Reese asked, as she pulled into a space next to the house.
Laura turned to her friend, “I never considered it to tell you the truth.” She stepped out of the vehicle and gazed up at the porch. Dried leaves from the previous year were stuck in cracks in the floorboards, and cobwebs appeared along the upper windows and sides of the deck rails. Two well-worn, wooden rockers sat to the right side of the entrance, one of which rocked slightly from the summer breeze. “Looks like we’ll need to do a little tidying up around here.”
Reese joined by her side. “I don’t know,” she said hesitantly, looking at the moving rocker, “maybe we should ask Samuel over there if it’s all right if we stay here?”
Laura laughed at her inference. “My grandmother said those rockers are original to the house. Grab those groceries off the back seat, sister and I’ll bring our luggage. I’m sure there is a lot to do inside as well.”