You are here: Home / Fiction / Romance / Halfway to a Southern Heart by Anthony Mays 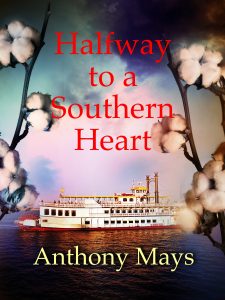 Rebecca grew up in a well-to-do family in Memphis. For years, her father wanted her to marry the son of a family friend, but Rebecca did not love him. No sooner had she turned eighteen, than she became pregnant by Vernon; a man she barely knew. Before she could share the good news with him, he suddenly left Memphis, never to return. Devastated, she had no choice but to give up the baby. Her parents sent her away to hide her growing shame, and arranged for an adoption. But Rebecca couldn’t go through with the adoption, and made her own plans. With her secret secured, she returned home and dutifully married. In time, she gave birth to another child. Life was good, until fate stepped in threatening to expose her secret. A series of events ensued that not only threatened to destroy her family, but also the lives of a family living in the fertile cotton belt of Arkansas.

What Inspired You to Write Your Book?
This was my first commercial piece of writing and got started on a whim as my wife and I occasionally travelled from St. Louis, MO to Tunica, MS. When you get into Missouri and Arkansas, you can’t help but notice the cotton fields from the highway, and we had a chance to see them at different times of the year. My favorite time is early October when they harvest the crop and wind-blown cotton balls dot the landscape. We even stopped by the roadside to pick a few bolls which further fueled my desire to write a story. After visiting one of four small communities in Arkansas, we learned about the book, A Painted House by John Grisham, and visited the house in Lepanto, Arkansas that was used in the movie version. That sort of ‘sealed the deal’ to put meaningful thoughts on paper.

How Did You Come up With Your Characters?
The two main character’s first and last names were taken from community road signs along I-55 in Arkansas. I had said to my wife, they would be great names to put in a story, so we just started making up things about characters like who they were and what they would be doing. One thing led to another, and after several trips to areas of Arkansas and Memphis my wife had jotted down sufficient notes that we had a pretty good outline. One day I began to write the story. Five years later, it became a reality.

Book Sample
When they approached the last bend in the river, the crew suddenly became alive with activity. Even Vernon chipped in and performed his duties, just as he had done hundreds of times before.
Rebecca watched him intently, marveling at his strong physique. She could see how much he loved being on the water and, for a few minutes, believed she had been forgotten. She became jealous that the Memphis Star held his attention more than her at that moment; a silly thought.
A flurry of activity on the riverbank, at the point they seemed to be heading to, caught her attention. She could see two men busy themselves untying ropes that entwined the large, wooden posts that also supported the dock. Another man was pacing back and forth, pausing briefly to gauge the progress of the steamboat as it approached the shoreline.
Farther off, another man, who was leaning against the side of an old, pickup truck, waited along the dirt road.
“Prepare to make landfall,” boomed the voice of the captain from the top floor of the vessel.
Within a few minutes, the Star was securely fastened to the dock, and the men onboard began unloading stacks of burlap bags, crates, and other materials.
“Cap’n, we should be back by five o’clock”, Vernon yelled up to the old man above, as he grabbed Rebecca firmly, pointing her in the direction of a pickup truck.
The steely eyes of the captain followed them off his boat. He was not keen on having this girl onboard the Memphis Star. He was even less keen that she presented a distraction to Vern, who was there for important business – to get a cotton contract.
Reaching the pickup, “Rebecca, meet Alexander. He works for my brother, and will be taking us to the farm.”
“Nice to meet you, ma’am,” he said, removing his straw hat and opening the cab door for her with his other arm.
She nestled into the middle of the cab between the two men. The truck soon bounced its way along the dirt path until it reached the hardtop road.
Along the way to the farm, the men made small talk with each other, while Rebecca looked at the fields of young cotton plants that eventually would become full of white, furry balls. She had seen raw cotton before when visiting her daddy at work, but this was her first look at it growing in the field. It was a sharp contrast to seeing the burlap bags filled to bursting, that were stacked high in the freight yard destined to points unknown to her.

It wasn’t long before they came to a stop in front of a modest, one-floor house. A screen door opened, and out stepped a tall, thin man and a dark-haired woman onto the porch that stretched the width of the house. They stood watching as the party of three disembarked the truck. Rebecca suddenly had second thoughts about leaving the confines of the cab, as she did not feel it was a warm welcome.
Following Vernon up the stairs to meet the couple, she watched Alexander take the truck a few hundred feet toward a large barn. Feeling about as uncomfortable as she had ever been in her whole life, she wished she was still in the truck.
“Hi Cletus; Marie. I’d like you to meet Rebecca.”
Marie, the wife of Cletus, helped to ease the awkwardness in their meeting. She gave Rebecca a light hug, and invited them inside.
They sat in a small living area at the front of the house. Marie was first to attempt to get to know the girl Vernon had brought with him. “So, you are from Memphis?”
“Yes ma’am”, she responded to her hostess.
“I like Memphis,” Marie responded trying to put the girl at ease. “It’s a nice place to visit, but we haven’t been there for a few years. What about your family?”
“I’m an only child. My daddy works for the railroad; my mother keeps busy with her social clubs. And, we have a nanny who looks after all of us.”
“Sounds like you have a nice family,” Marie commented
While the women chatted, Rebecca and Marie could sense the tension between the brothers sitting across from them. Knowing that the men wanted to talk without them sitting there, Marie invited Rebecca into the kitchen to help prepare lunch.
They walked past a two bedrooms and a bathroom to get to the kitchen at the rear of the house. Once there, Marie again engaged Rebecca. “I’m sorry we made you feel uncomfortable when you arrived. I could read it all over your face. You seem like such a nice, young girl.”
Marie pointed to the kitchen counter. “Grab that bowl over there, please.”
“I guess I was kind of shy about meeting you. But you have tried to make me feel welcomed, and I thank you for it.”
“How long have you known Vernon?” queried Marie.
“A few months now. We just sort of met one day and he swept me off my feet. I’ve enjoyed being with him, and now I am looking forward to getting to know his family.”
“What has he told you about us?”
“Not much. Vernon doesn’t share a lot of himself with me. At least not the way I would like. I usually have to pull things out of him.”
At that moment, they could hear a heated exchange happening in the parlor a few rooms away.
“I guess you know that my husband and his brother don’t get along very well.”
“Yes ma’am. Vernon told me that your husband wants him to help with the farm.”
Marie set about getting things ready for lunch. “I’m not making excuses for either of them, but it would never work out. They are both so stubborn; got it from their father. Vernon would never be happy here – he’s too footloose and fancy free.”
As she was giving Rebecca her opinion, the argument in the parlor grew a louder.
Marie closed the door to the kitchen in an attempt to distract Rebecca’s attention from it, and continued. “Where do you see your relationship with Vernon going?”
“I’m not really sure? I like him a lot, but my parents don’t know that I have been seeing him. My mother met him at our first meeting, but she didn’t seem to care for him. I guess that is why I have been secretive about our relationship with them.”
Marie continued to put their lunch together with Rebecca’s help. She obviously was well at ease in the kitchen, and her movements reminded Rebecca of Margaret’s skills in their own kitchen.
“How old are you, if you don’t mind I ask?”
“Eighteen this past spring. My parents hosted my coming out party about the same time as I met Vernon.”
“You’re pretty young to be in a relationship that seems to be this strong. Have you had any other boyfriends?”
“Not really. There is this one fellow my parents have been trying to match me with, but I just don’t feel about him as I do Vernon.”
“What’s your opinion of Vernon?” asked Rebecca.
She could see that Marie was slightly uneasy with the question, but was determined to get an answer. With no response forthcoming, she asked again. “Can you please tell me about Vernon?”
“Oh sweetie, this is hard for me to say, but I think you should end your relationship with him as soon as you can. He’s not the man for you. He’s a loner, and I’m afraid he will only break your heart.”
Having said that, the front room became quiet. It was almost as if the two men had overheard the women’s conversation and ended their own bickering at each other. Of course, they never heard a word of it.
“Rebecca, there are napkins in that drawer,” she said, gesturing toward a hutch nearby. “Would you please put them out on the table, and I’ll go tell the boys that lunch is ready.” She departed the kitchen.
Rebecca was stunned by what Marie had just said to her. She didn’t even know this woman, and for her to say what she did, caught her completely off-guard. How could Marie have made such a quick judgment about their feelings toward each other? She couldn’t believe that this was happening, but became committed to put it behind her and not discuss it further.

Buy Halfway to a Southern Heart On Amazon