You are here: Home / Children and Young Adult Books / Guardian of the Gauntlet by Lenita Sheridan 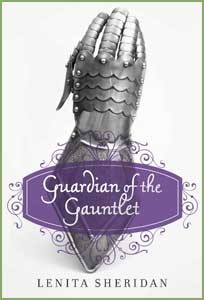 When sisters, Princesses Camari and Mila, meet Prince Denir, they soon find he has a special gauntlet. This gauntlet only works if one has faith in a higher power. Using this gauntlet, Denir turns Camari invisible. When he is called off to war, Camari is left in the predicament of being invisible. She must learn not only how to make herself visible again, but how to outwit two wicked characters.

What Inspired You to Write Your Book?
The setting for my book was inspired by places I’ve lived starting with Alaska, then the British Isles (specifically Northern Ireland), then Whidbey Island, Washington. The plot was inspired by a dream I had of a princess being kidnapped (Mila is kidnapped in the first Guardian of the Gauntlet book). During the time I started the book there was a snowstorm, school was closed, and I was reading Stephen R. Donaldson’s book, A Mirror of Her Dreams.

How Did You Come up With Your Characters?
The characters are facets of myself, especially female characters like Camari. Mila is not just a facet of myself, but of friends I have had, as I never had a sister. I had to imagine what it would be like to have one. I had one sibling, a brother, but he doesn’t enter into this, except as to know what it’s like to have a sibling. The male characters are composites of men I have met, but not fashioned after any one person.

Book Sample
In the Sendior mountains, two kingdoms away, lived a magician named Mecandel. His heart was filled with wickedness, but his power was weak. He was a short man of stocky build with cinder-black hair and virulent eyes of an indistinguishable murky color. As the first son of a wealthy baron he enjoyed enormous riches. He owned an estate in Lower Sendior which he left his wife, the Baroness Fallo, to rule. Fallo had been promised to Mecandel in an arranged marriage. She was a simple, gullible woman, the only child of a neighboring baron and had inherited her father’s estate, which comprised the whole of her dowry. Fallo had brought the estate to the marriage, and Mecandel the means to keep it up, for it had been foundering and wrought with debts. Mecandel soon tired of his wife and her simple ways and went to the mountains to strengthen his magic. He had a great black tower built which he furnished mostly with bookcases full of spell books and paraphernalia for making magic such as dried ripplewort, an orange berry that only grew in the mountains of Sendior, and locks of hair which he had snatched from persons of royal blood or whom he suspected of having sorcery in their ancestral line.