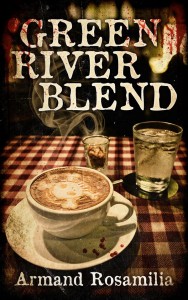 Nothing exciting ever happens in a small town…
Especially in the sleepy Florida beachside stretch known as Hammond Beach, nestled between Daytona Beach and St. Augustine. Free from corporate businesses and a slew of tourists descending upon the quaint former fishing village, Hammond Beach is like a painting.
Locals run the businesses on Main Street. Even when a new coffee shop opens, the owner hires only Hammond Beach locals, including manager Betty. She’s born and raised in Hammond Beach and knows everyone.
But when the latest and greatest coffee is put out, Green River Blend, strange things begin to happen to the residents of Hammond Beach…

What Inspired You to Write Your Book?
I’m a huge fan of Bentley Little books. I’ve always wanted to write a suspense thriller in the same vein, and I hope I’ve succeeded. I am also a big fan of coffee and horror, so adding in all of these elements…

How Did You Come up With Your Characters?
I wanted to come up with as many varied realistic characters as would be found in a small town in Florida or anywhere else in the US. I tried to stay away from as many cliches as possible, as well.

The smoke covered miles, snaking over the Green River and points beyond. By the time police, fire and rescue crews had converged on the strip mall it was nothing more than a ruined husk, thick plumes of black smoke puffing into the air.
By tonight’s eleven o’clock news anyone in the media coverage area would know the fire was pretty typical: a coffee pot left on after the store, a local mom and pop coffee place that had only been in the strip mall for a little over six weeks, was left on and the automatic shutoff failed to work. Maybe a solemn news anchor would talk about the poor owners who had their dreams put to the torch, or the neighboring businesses who’d also been burnt out. In the next couple of days, once the bodies were found under the floorboards, the police would take a closer look at the coffee shop and it’s owner, but by then it would be too late.
He’d already be a ghost, a fictional name on a few legal documents. There would be no real paper trail, no money to follow. The credit card transactions went to a dummy account and all the cash was long gone. As was the owner.
James Grayson rolled up the window of the limousine as the wind shifted, blowing the smoke in circles on the wind. “We can go now, Chandler. I’ve seen enough.”
“Very well, sir.”
The black limo pulled onto the highway. Another two police cruisers shot past them, lights and sirens blazing.
“Where to, sir?” Chandler asked as he drove.
“To the airport.”
James nodded when his driver caught his eye in the rearview mirror. “I’m going to go as far away from Washington State as I can this time.” He looked out the window and idly watched the day creeping into night, splashing colors on the rolling Green River.
“Florida?”
James shrugged. “Sure. Book us a flight.”
“Us, sir?”
“Yes. I want you to come with me this time.”
“I don’t like to fly,” Chandler said quietly.
James grinned. For a huge man he was scared of his own shadow, but Chandler had many uses. He’d been a faithful lackey for many years and would do just about anything to make James happy. Except, it seemed, getting on an airplane.
“Book my flight and await my further instructions. I’ll need you there this time. A remote will no longer work. I’m so close to completion now. I can feel it. Make sure everything is shipped once I settle in the next spot, and then drive out. No more than a week. I want to begin immediately before someone puts two and two together.”
“As you wish, sir.”
James closed his eyes and decided on a power nap before they arrived at the airport. Chandler would take care of all the details. He always did.

Betty Coburn folded her arms and stepped back from the counter of The Coffee Shop. Everything was in place: the signage, the impulse items strategically placed on the countertop, the wall of coffeemakers and stacks of coffee cups.
“How do we look?” the owner, James Fortson, asked her as he stepped from the backroom with a grin. He was dressed in jeans and a brown t-shirt but looked like the kind of man who was more comfortable in a suit and tie, which he’d been in every day since The Coffee Shop was first mentioned in Hammond Beach.
The residents had sighed in relief when they found out this wasn’t a chain. Nestled between St. Augustine and Daytona Beach, Hammond Beach was nothing more than a three block wide expanse between the Atlantic Ocean and the Intracoastal Waterway. The town was dotted with local businesses, a bevy of mom and pop stores. No McDonalds, no Publix, no Bealls and no Kangaroo gas station. The governing board had done their very best to keep Corporate America out of their little village.
“I think we need more focus on the food,” Betty said. She’d been hired as floor manager five days ago, after an extensive interview with Mr. Fortson. The old Hammond Coffee Shoppe had been a landmark for close to fifty years but the building was decaying and the repairs and upkeep was too much for the owners, who’d reluctantly had to sell to Mr. Fortson. Rumor had it he’d given them an extra 25% on their asking price to rush through the paperwork and put their minds at ease, and he’d only hired locals to help with the rebuilding of the shop, updating the fixtures, tables and chairs and changing the sign outside. The parking lot was repaved at his expense even though the landlord told him it wasn’t necessary and anything he did to the outside of the business was on his dime.
“Nonsense. We need the focus to be on the warm atmosphere, the many outlets so people can come and sit with their laptops and relax, and of course on the coffee. Are you sure you won’t try it? The Green River Blend is to die for.”
Betty smiled at Mr. Fortson. When she’d told him she wasn’t a coffee drinker he’d wrinkled his nose at her. He seemed surprised someone didn’t partake, and spent most of her interview asking Betty about the locals and her own history, not only in the food industry but her personal life. She’d been hired on the spot.
He was an unorthodox boss to work for, letting her do all the setup and hiring of the staff in the last two days and not asking her anything other than making sure she hired enough people. Mr. Fortson was also paying well over minimum wage, which attracted quite a few applicants and not only high school or college students but those looking for a career.
“We’ll need an extra coffee carafe for a fourth Green River Blend,” he said to her.
“A fourth? Wow. There are only spots for eight in total. I thought three was too many, to be honest,” Betty said. “Are you sure we’re not wasting prime real estate? We should spread it out and see what sells first.”
Mr. Fortson smiled. “I’ve been in this business a long time. I already know what will sell. Trust me. You’ll have a line out the door and down Main Street wanting another cup of this blend.” He waved at a couple walking by on the sidewalk, casually peeking in to see when it would be open. “By opening I’ll have enough pre-made packs made of the Green River Blend. All you’ll have to do is drop it in, add water and let it percolate. For our first day we’re going to give a free cup to the first two hundred customers.”
“Two hundred? That’s very generous. It will definitely get people in and talking.”
“I’ve alerted the media and I’m running full-page ads in and around town.”
“Nice. We’ll be packed. I might need to hire temporary help for the grand opening. And we’ll need to make sure all the various coffees are stocked and ready to go,” Betty said.
“Remember, though… only the Green River Blend will be free, and if we go over an extra hundred I will have no problem doing it.”
“Are you sure you’ve crunched the numbers? This will put you in a hole. Not to mention the money you’ve spent on repairs and new furniture and updated equipment. When it’s time to do the paperwork on all this I’m sure you won’t like what I show you.”
“Don’t let it worry you, dear,” he said and smiled with his perfect teeth. “You’re job is to help customers and staff. You’re my front-end manager. I’ll handle all the paperwork. All you have to do is smile and make sure everything runs smoothly and according to plan.”
“Are you sure?” Betty was taken aback. “You’re paying me a really good salary, and I assumed it meant running everything while you were gone.”
He shook his head and pointed to the giant two-way mirror behind the side counter. “I’ll spend most of my days and nights in the office, watching and doing the paperwork. In fact, you don’t even need a key to the office. I’ll have a safe put into the backroom so you can add the deposits at the end of the night, and slip the paperwork under my door. I’ll add a slot for it, in fact. We’re only going to be open from 7 am until 3 pm. I don’t think we’ll need to extend the hours right away, but we will if we have to.” Mr. Fortson winked. “And in no time we’ll be opening more and more. Trust me.”