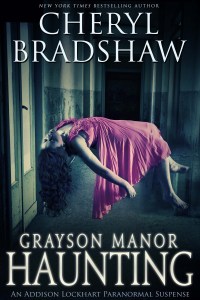 When Addison Lockhart inherits Grayson Manor after her mother’s untimely death, she unlocks a secret that’s been kept hidden for over fifty years. For Addison, it seems like she’s finally found the house of her dreams…until the spirit of Roxanne “Roxy” Rafferty comes to call. Who is Roxanne, why is she haunting Grayson Manor, and how will Addison’s connection reveal a key to her own past that she thought no longer existed?

What Inspired You to Write Your Book?
I’ve been fascinated with ghosts and the paranormal ever since I was a child, and have actually had a few hair-raising experiences of my own. As an author, I started out writing mysteries (Sloane Monroe series), but I have been longing for quite some time to pen a good ghost story series that incorporated elements of murder as well. This is how the Addison Lockhart series began. This, and watching too many episodes of Celebrity Ghost Stories and coming up with idea after idea. It’s my guilty pleasure, and one I’ve kept “in the closet.” I guess the secret is out!

How Did You Come up With Your Characters?
I wanted something different with this first novel in my new series–spunky, so I went with red hair. And unlike my other private investigator series, I wanted Addison to be an amateur sleuth, with a love interest to match.

Born and raised in Southern California, Cheryl Bradshaw became interested in writing at a young age, but it was almost two decades before she put pen to paper. In 2009 Bradshaw wrote Black Diamond Death (Book One: Sloane Monroe series). Within six weeks it entered the top 100 in two different categories and remained in the top 100 for over a year. In 2013, Bradshaw introduced a new paranormal thriller series: Addison Lockhart, the first book titled Grayson Manor Haunting.

Bradshaw is the founder of IWU on Facebook, a writers group with over 3,000 members. In August 2012, Bradshaw was named one of Twitter’s seven best authors to follow. In 2013, Bradshaw’s novel, Stranger in Town, was chosen as a Shamus Award finalist in the category of best P.I. novel of the year. She was the only female nominated in her category.