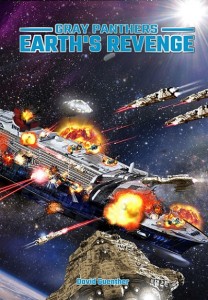 The defenders of Earth, the Gray Panther Army saved the Earth from an invasion from the Libra Alliance on 6 January 2128. The jubilation was short lived as Earth’s defenders found out there was a second deadlier fleet that would arrive at Earth in about two years. The Gray Panther Army consisting of ancient veterans, who have been enhanced through nanite technology to once again be young men and women, are forced to expand their ranks to include even the young. The Gray Panthers enlist the services of Matt Andrews and his team of crack flyers “Matt’s Marauders.” Their mission; to fly captured fighters deep in enemy space from a captured raider to buy Earth time as defenses are built up and the fleet increased in anticipation for the looming invasion.

Targeted Age Group:: 17 to having to be read to

What Inspired You to Write Your Book?
This is the second book in the series. The first book was inspired from the many military retirees I know and the thought of what they could do if given a “do over.” The combination of their experience and patriotism as their driving factor. This is how I imagined it happening.

How Did You Come up With Your Characters?
The characters are a mix of many folks I know combined into new characters. The best way to create characters is from real people. My alien characters are base on emotions instead of real life people, dedication, greed, anger. It seems to work for me.

Book Sample
Gray Panther Training Field 9, Arizona
17 August 2128
James “Jimmy” Brewster age 92, was wondering what type of God there was in the universe to see him in the mobile infantry of all the damn places. He had managed to spend almost his entire thirty years in the US Army as a crew chief in spec ops helicopters. Now the Gray Panthers had him as a flight leader with three fire teams under him. Granted it was without a doubt the best flight in the mobile infantry. It was still a good trade he figured as the nanites had him rejuvenated to a body of a twenty year old, a twenty year old dying of heat he thought as he watched his teams maneuver with his spectrum glasses. The three, three man, teams were invisible to the naked eye when they wore their optical deflection combat suits and only looked like a slight blur if you were able to focus on one. The teams were all converging on their targets when a shuttle started to land almost on top of him. His squadron commander hopped out and pointed for him to get on the shuttle.
“First Fire team leader take charge of the exercise. Sgt Brewster with me,” the commander hollered over the sounds of the engines.
“Sgt Brewster, I just received orders for you, if you want, I will try to keep you here, and I’d hate to lose a good man like you.”
“What are the orders, sir,” Brewster asked wearily.
“No idea, they are sealed, I’m supposed to get you on the next shuttle going “out” you will then open your orders in transit.”
“Sir, going “out.” As in space?” Brewster asked puzzled.
“That’s affirmative, sergeant,” his commander replied.
“Sir, if it’s that important I wouldn’t feel right trying to turn them down.” I’m out of the God damn mobile infantry! “Like the old saying goes the needs of the many outweigh the needs of the few.” I’m free!

Arizona Space Ship Cornucopia in lunar orbit
17 August 2128
Chief William “Guns” Wright stepped out of the raider, back onto the flight bay, and once again started to smell the combination of cat piss and humid body odor. At least the raider didn’t have any strange smells. Guns had been in Navy spec ops for twenty years working small boats. Now as a Gray Panther, the Seventy nine year old was responsible for this mystery machine as her crew chief. Scratching his head he thought, At least there’s an expert from the Gray Panther Army coming up that can be responsible for this thing and I can learn from him. I wonder if I’ll have to use small words when I talk with him.
Lt. Chester Horton, age twenty two, stood in the bay looking at the raider from the distance. The huge old man exiting the raider just filled him with disgust, another “recycle,” why couldn’t it be a normal person like him. The old man was at least six feet tall and looked like he belonged on a football team. Though big, he did not see any signs of fat on the old white geezer, the shiny bald head made him think he would call him “Shiny”. Ignoring any more thoughts of the geezer, he started to take in the raider. The raider was much larger than he imagined, but then he reasoned it had to be big to hold ten fighters and two shuttles. The exterior was black but seemed to bleed rust in numerous places. Entire areas were still missing where the original weapons had been. Crates all around it no doubt held the upgraded weapons. He could see stacks of smaller boxes with their orange diamond shaped stickers denoting they contained ammunition. The front of the ship seemed to narrow almost to a point whereas the back of the ship was two stories high with the back of the ship a flat straight line from bottom to top. Most of the ship appeared to be two stories high except for the front where the top of the ship sloped down.
The old man was doing something to an exterior panel and the entire back of the ship started to retract like a garage door. Walking over to the side he could now see there were two levels of fighters, he now knew where the launch bay was. Just as he started to try and figure out what the other protrusions were on the exterior of the ship his view was blocked by one Chief William “Guns” Wright. Looking down on the little Lieutenant he smiled to himself as the short officer took a step back.
“Good morning Lieutenant may I help you?” Which really meant, Why the fuck are you so interested in with my ship? The chief asked, his hands resting on his hips, where he had a holstered automatic. The perceived threat in the greeting was not lost on the Lieutenant, as he looked at the old man before him and felt instantly intimidated.
“Good morning, Chief. I’m Lt. Chester Horton. The raider there is my ship. I’m the weapons and navigation officer.” Guns tried to hide his shock at the thought of this little “Kid” being part of the crew but then remembered many lieutenants that were not that much of a problem after he had trained them.
“Welcome aboard, Lt. Horton. Would you like me to show you to your berthing area? Or would you prefer a tour of the ship?” Guns asked.
“How about taking me to my berth so I can drop my bags, then you can continue on with your duties as I explore,” Horton replied as he dropped his two huge sea bags. Turning towards the ship Guns started walking at a brisk clip as Horton looked at the chiefs rapidly disappearing back, in shock then grabbed his bags and ran to catch up with the chief. He caught up as the chief entered through the hatchway then followed him, noticing how narrow the passageway was as he kept rubbing up against the bulkhead with his bags. The chief stopped in front of a small circular hatch and opened it for him. Looking in, he saw a gray metal shelf protruding from one bulkhead, on the other side was a pair of old gray metal lockers with a tiny desk between them. The area was softly illuminated from a light source in the overhead.
“Here’s your new home lieutenant. You can get bedding from the quartermasters assigned to the Arizona Space Ship Cornucopia as well as any other supplies you need. Good day, sir.” Guns seemed to have disappeared before his eyes as he stood in shock at what he would have for quarters. Throwing his bags through the hatch, he was only then able to fit into the cabin. Quickly loading the first locker, he barely got the rest of his clothing in the second wall locker when an enlisted man rapped at his hatch.
“Sir, we were told to bring these boxes to you from supply. They contain your flight gear and astronavigation kit. Would you like us to bring them to you or leave them here in the passageway?”
“Just leave them out there. Does that include my——” he realized he was again alone and in a quandary as he could not begin to fit even one box into the cramp quarters. Frustrated he accepted defeat and went to get help from the chief.