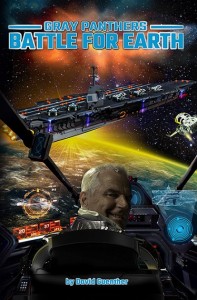 The year is 2126 it has been 30 years since Iran nuked Washington DC. America has traded security for liberty following the attack with the suspension of the Constitution and the Bill of Rights. The Constitution is not even taught in school any more. In this environment, Dan “D2” Daniels, a retired Army NCO of the old breed sworn to protect the constitution finds a crashed space ship and learns at the same time Earth will soon be invaded. Using the technology from the space ship, Dan forms an army of fellow senior veterans with two missions. First, to revive the Republic they had sworn their allegiance to and their second mission to save that Republic, and the world with it. Their first foray includes converting the CVN 80, USS Enterprise, a rusting air craft carrier, from a rusted heap waiting to be scrapped, into the first ship of the new space fleet of the Gray Panthers.

Targeted Age Group:: 17 to having to be read to

What Inspired You to Write Your Book?
The many military retirees I know and the thought of what they could do if given a “do over.” The combination of their experience and patriotism as their driving factor. This is how I imagined it happening.

How Did You Come up With Your Characters?
The characters are a mix of many folks I know combined into new characters. The best way to create characters is from real people. My alien characters are base on emotions instead of real life people, dedication, greed, anger. It seems to work for me.