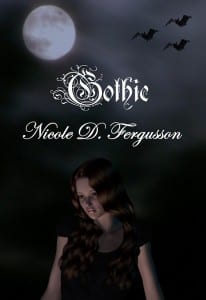 Dahlia is starting a new life. New university, new home, new friends. This time, she’s not going to be surrounded by werewolf packs and vampires. She has fought against a life filled with supernaturals since she was eight years old. Does it matter when she’s more attracted to the vampire in her class than the normal university boyfriend she picks up? Or when her werewolf kin start gradually start to go missing? Of course not. A normal life is what she wants. What she’s always wanted. A normal life. This is exactly what she’s been waiting for.

What Advice Would You Give Aspiring Writers?
Keep writing. Keep working towards getting better at your craft. Actually, I wrote a blog post just on answering this question that might be a more thorough way of answering this question, complete with links with good advice that I’ve compiled over the last year: http://nicole-d-fergusson.blogspot.com.au/2013/02/advice-for-writers.html

Author Bio:
Nicole hails from the town of Reservoir in the Northern suburbs of Melbourne, Victoria, Australia. She lives there with her fiancee, two cats, and a bottomless cup of tea.

Currently working on the follow up novel to ‘Gothic’, titled ‘Revelry’, slated for release in 2013.

What Inspired You to Write Your Book?
Dreams sometimes. Particularly with my current series, ‘Gothic’. I can’t actually say what the scene in the dream was, as that gives away spoilers for the second book (which is, of course, coming soon!) but suffice it to say that that gave me my three main characters. I sat on the idea for almost a year before starting to actually write it, though. It was my Honours year at university. The only reason I started writing when I did was because I just needed something that was a little less dry, a little more fun, and there you have it: Gothic appeared on virtual bookshelves within a year of the first draft!