You are here: Home / Fiction / Goodbye Crocodile by Conor Patrick 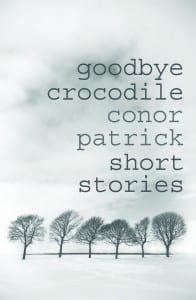 Goodbye Crocodile is a collection of twelve crisp short stories written in stark, resonant prose, focusing on the themes of mourning, secrets, rebirth and redemption across American landcapes.

How is Writing In Your Genre Different from Others?
I try to approach stories objectively, stating What Happened, in a way, and letting readers reach their own conclusions. This is done through exact language that focuses closely on small numbers of characters within the greater context of society and landscapes.

What Advice Would You Give Aspiring Writers?
Read ten times the amount that you write. Don’t fear the classics. Write in your books. Practice writing just like you would practice turning wood or playing baseball. Consider closely the language. Use all five senses. Be careful with the sixth. Let stories keep you up at night. Read your writing aloud. Read others’ writing aloud. Don’t worry about awards, merits, competitions, rejections, or acceptances. Write the stories that you want to read.

Author Bio:
Conor Patrick was born in the south-western United States in 1983. He

grew up in Northern Arizona, in the heart of the largest Ponderosa

Pine forest on Earth. From there, he moved progressively northward,

eventually earning an undergraduate degree from the University of

Idaho. In 2010, he crossed the Atlantic to stalk around the United

Kingdom, where he gained an MA in Creative Writing from the University

of Portsmouth. His writing has appeared in various publications

throughout the US and UK, including The London Magazine, Eastown

Crocodile, was published in August 2013.

What Inspired You to Write Your Book?
These stories were written during different periods over the last three years. They are my way of reflecting on and exploring some of our most deeply-rooted emotions. Here you will find shame, grief, contentment, longing, and love.