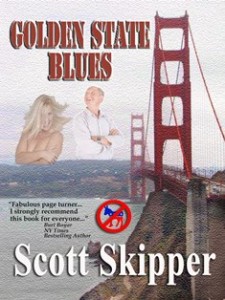 Can two guys dismantle California’s political quagmire from the bar of an Italian restaurant in the predominately-liberal town of Claremont? Can they survive if they do? The plot they hatch takes everyone, including Madam President, by surprise, and outrages just about everyone in America’s most left-leaning state. However, the results speak for themselves, and while their capital is rising, our heroes find the time to indulge in the newly legalized sport of sniping taggers caught in the act of spraying graffiti. But there is always trouble in paradise and the governor’s past catches up with him in the form of an ultra-sexy young blond with a habit of causing trouble as well as getting into it. Trouble, that is, with the media, the entrenched Democratic legislature and the radical Islamists at the mosque down the street. It would have been only a minor indiscretion if the tabloids hadn’t been taking videos with a drone. Despite the scandal, with the California National Guard as his personal army, the chimerical governor runs roughshod over the deep-seated dilemmas that perennially plague the Golden State. With the wave of his hand he eliminates the welfare state, the homeless problem, illegal immigration, broken schools, high-speed pursuits, traffic gridlock and the budget crisis. Come see how he does it.

What Inspired You to Write Your Book?
For many years I operated a business in California, so I have seen with my own eyes political madness that has driven industry over the state line. Having lived in California all of my adult life, I have watched the quality of life go down the drain. I wanted to write a book that lampoons the folly, foolishness and foibles of the once great state of California, and indeed, the entire United States.

How Did You Come up With Your Characters?
Some readers have had the audacity to suggest that the main character is me. I deny it. Adam Peyton is much younger and more indiscreet than me. Governor Jim, on the other hand, is based on a guy I met in a bar. As for the voluptuous and troublesome Angel, I might have seen a picture on the internet that served as a model for her.

Book Sample
The bar at Caffè Veneto was el shaped. The short leg had the pass through, the waitress station and two stools. Adam’s favorite spot was the first stool from the corner on the long side. He was seated on that stool idly watching the Fox News ticker and relating his adventures in the capital to Jenifer at the beginning of happy hour when a young blond took the other corner seat. She said, “Are you the friend of Governor West?”
“Everybody in this place is the governor’s friend.”
“Yeah, but are you Adam Peyton?”
“That depends if you’re the press or not.”
Her smile favored the right side of her face and revealed lovely white teeth and dimples. “That answers my question. I need the ladies’ room and could I get a mojito?”
“Can I see some ID, please,” Jenifer said. When the girl was in the restroom she said to Adam, “I did that as much for you as for me.”
“So how old is she?”
“She’s twenty-three, but the interesting thing is her name is West.”
“It’s a common name.”
“Yeah, right.”
As she walked back to the bar Adam appraised her. Her white jeans fit skintight and the pale blue tank top hugged a perfect pair with nipples that her bra could not repress. That was as far as he got. She said, “I’m Angel,” and extended her hand to shake.
“I’m sure you are.”
That drew another crooked smile. “Will you introduce me to the governor?”
Jenifer’s eyes widened as she set the mojito in front of her. Adam shuffled through a confusing series of thoughts and feelings not the least of which was jealously. “Would it be any of my business to ask why you want to meet the governor?”
“He’s my father.”
Jenifer said, “Holy shit!”
Adam was struck mute.
“I’ve never met him, and as far as I know, he doesn’t know I exist. I hope you will help me.” That last was said beguilingly enough to make Adam’s scrotum tingle.
Adam stammered before he managed to say, “Yes, sure, but you understand that this is a touchy subject.”
“Sure, and I don’t want to do anything to interfere with what he is trying to do. When he got famous, my mother confessed—bragged is more like it. She has beaucoup bucks and didn’t need him to support me. As far as I know, she never made contact after she found out she was pregnant.”
“Well, frankly, this is out of my league, but I’ll call Jim’s publicist and see how he thinks we should handle it. In the meantime, let’s keep this a secret.”
Angel leaned close to Adam and whispered, “Can we trust the bartender?”
“Oh, yeah, Jenifer’s solid.”
“Okay, I’ll be more careful. Can you give me a place to stay?”
It wasn’t pure terror that Adam felt. Terror mixed with a strong dose of desire to get his hands on that succulent young body. “I’ll do what I can. How about another mojito? I know I could use another gin. Make it a double, Jen.”