You are here: Home / Bargains and Freebies / Bargain Books Under $3 / Gisela’s Passion by Astrid V.J. 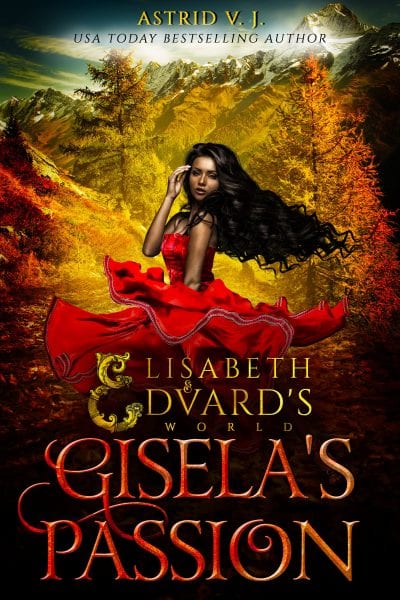 Ever since she can remember, 18-year-old Gisela Winry has wanted to dance. Her strict father sees dancing as the path to immorality, licentiousness and debauchery.
Devastated at his wrath after she secretly auditions and wins the title Harvest Queen of Ylvaton, Gisela turns to her best friend, Hilarion, who proposes a path she cannot take.
With their friendship broken, Hilarion retreats to the solace of the forest where he lets his hatred and jealousy fester.
Meanwhile, Gisela meets Vincent, a young nobleman seeking to escape his dead brother’s shadow. Will Gisela be able to uphold her family honour and get to do the one thing she’s always been passionate about? Will Vincent’s chance encounter with the lovely harvest queen from a tiny village become more meaningful than earning his father’s approval? And will Hilarion fight for the love of his life or give in to the darkness within him?
Immerse yourself in the life of the common people of Vendale in this prequel to The Siblings’ Tale. Gisela’s Passion is the retelling of a lesser-known Slavic folk tale, which is better known in its incarnation as a French ballet.

What Inspired You to Write Your Book?
Giselle is my favourite ballet and when I came across the original Slavic folktale, I just fell in love with it all over again. When I finished writing my first fairytale retelling, I was wondering what more I could do with the world and had the inspiration to write a retelling of Giselle because it somehow, magically fit into the plot I'd already written for The Siblings' Tale.

Gisela's Passion developed into the prequel for The Siblings' Tale and this connection is made even clearer in the treasure hunt freebie, "Vincent's Dream" that's accessible in the ebook of Gisela's Passion.

How Did You Come up With Your Characters?
I developed my characters for this book based on what I as a modern woman wanted to engage with based on the original plot of the story. The folktale is about a love triangle and I wanted to take a closer look at why Hilarion was so jealous of Giselle lavishing her attentions on another. I've also always had more male than female friends and I wondered if any had felt like I'd put them in the friend zone and what that might be like. Hilarion's character developed out of these musings, while Gisela evolved from my desire to show what happens to us when we don't follow our hearts. We are constantly faced with the decision to follow our dreams or stick with "what's reasonable" but staying stuck in our conditions and shutting off our hearts kills us a little inside every time we do it. Gisela's character is an exploration of this and how our mindsets and thoughts guide our actions.

For joining the author’s email/newsletter list you will get:
The Sewing Princess, a two-part novella in The Wordmage's Tales series