You are here: Home / Fiction / Girl Made of Storms by Joseph Pywell 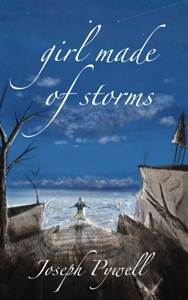 John Prospero, a disgraced Scottish Lord, and his inquisitive young daughter Miranda are shipwrecked on an undiscovered island. When they meet the only other two people on the island, a beautiful and mysterious Spanish woman and her boisterous son, Caliban, the four come together as a family, living under calm clear skies for many years.

But a storm is brewing and in the darkest corners of the island lies Ariel, a malevolent and cunning air spirit, imprisoned within a tree, plotting her escape – and revenge.

Joseph Pywell is a new author. His novel, Girl Made of Storms, is his first ebook to be published. He hopes you download it. If you enjoyed it as well, that would be super. He’s dedicated it to his wife. When he gets round to writing another book, he’ll dedicate that to his daughter. He doesn’t write to dedicate books to the women he loves, that’s just the bonus.