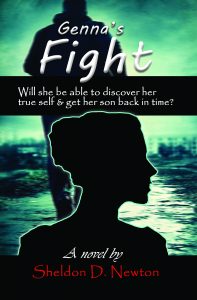 She Will Have To Fight To Survive!!!!!
After enduring years of so much abuse, beatings, scorn and neglect that began from her child-hood and followed her into adult-hood, pushing her to the verge of suicide on more than one occasion, can Genna re-discover her true self, rise above her horrid past and regain all that she has lost, including her son? Grab your copy and find out in GENNA’S FIGHT. (A Novel)

What Inspired You to Write Your Book?
I wanted to write a story which carries a lot of emotion and reality, as well as heart. I often thought I could not write fiction. But one day the inspiration came and I am really excited about this story. It shows how an abused woman struggled to over-come.

How Did You Come up With Your Characters?
I actually used my imagination. Each character came into play as I wrote from the abusive husband to the traveling kindhearted stranger, to the wise counselor who helped Genna along the way. The excitement and the horrifying effects of the story, along with it’s powerful ending really came as I wrote, thought and pondered.

Book Sample
“I am divorcing you Genna. You are leaving my house tonight, and you are leaving alone. You will not be taking Samuel with you. He is staying with me. You will not be carrying anything but the clothes on your back. You will not be taking the car because it is my car. I bought it. And now, I will need it for the next woman in my life.
You will not be taking the jewelry I brought you, the clothes I bought you or the shoes I bought you. You will not be taking anything. You will be leaving me the way you were when I met you, with nothing. You are nothing and you will be taking nothing.”
Genna was looking down because she could not face Tom. The years they had been together had been brutal on her part and the abused endured had literally made her feel worthless and vile in his eyes. Every word he was speaking was hitting her like an atomic bomb. The worst part was that she would not be taking her ten year old son, whom she had carried for eight and a half months and done her best to bring up, with her. Tom continued, “I have some papers for you to sign.” Pointing to the table near the door to their palatial home, he continued, “There are the divorce papers. And there are also papers to sign indicating to the judge that you do not want anything from me. The last set of papers releases my son, Sammy, into my care. You are a no-good woman and I cannot wait to get you out of here, and out of my sight for good. It was the worst twenty-two years of my life putting up with the likes of you. Good riddance. This is good bye.”
Genna looked up and asked very weakly, “Why did you marry me? Please tell me that. Please. I really need to know.” Tom looked her dead in the eye with an arrogance she could feel to her toes and replied, “Alright. You want to know the truth. It does not matter to me. If you thought I married you for love you are sadly mistaken. I never loved you.
I married you because you were a challenge. You had your mind made up that you were not sleeping with anyone before marriage, I couldn’t get you to break that choice and that intrigued me. I did not know of too many girls who were serious about that. And after attempting to make you eat those words on numerous occasions and not being able to get you to bend, I decided to marry you just to get what I wanted. But you should know I was sleeping around before I married you, even with some of your friends. I even went with Shonna, your next door neighbor the night before our wedding and with Ginger, your best friend, the night of our wedding. That was why I told you I needed to go by the office and came back home so late.” Genna wanted to scream. But she dare not for he would stomp on her. She wanted to cry, but the tears would not fall. She wanted to get angry, but felt she deserved just what she got.
He had spoken down to her so many times that she now believed him. Regardless of what happened to her he had convinced her that it was all her fault.”