You are here: Home / Bargains and Freebies / Bargain Books Under $3 / Fyra: Welcome to the Mutiny by Sunny Nicolette 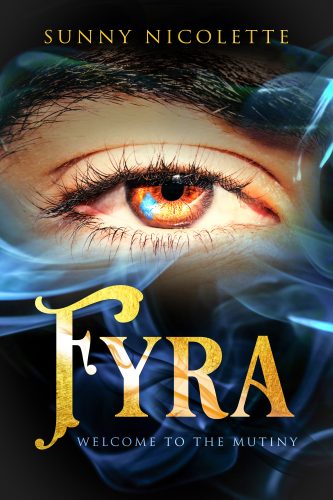 Reed lets the dark anger dwell in him— will it overcome him, or can he master his inner demons to help restore normalcy to a world gone awry?

Follow a young man’s journey as he wakes from a coma to discover he no longer resides in the present, but his soul has been transported 175 years into the future….everything he knew and loved is gone. Thrust into a rebel training camp called “The Mutiny,” Reed Stryker quickly discovers this world is far more supernatural and dangerous as he struggles to claim his place in life.

With each twist and turn, the stern and serious Reed learns he has to completely lose himself to truly find himself all while battling the dark enemy and fighting a love he cannot suppress.

Little does he know, fate directs every action for the greater good— his rebirth in this lifetime is no coincidence, but of a higher purpose. Traveling souls, destined love and twisted fate are no longer fairy tales. This compelling story intertwines mystery, magic, action, war, love and loss into a unforgettable tale of a failure turned hero.

But I have loved experienced emotions I could only write about. Feelings of loss, longing, heartache, victory, rejoicing, loneliness, and LOVE. I have LOVED with a love that can only be described in the beautiful rendition of words and a story otherwise untold.

My book is emotional, sensation-provoking, one of a kind and full of deep rooted situations most of us can relate too. It does not touch the surface of your heart, it touches the soul.

How Did You Come up With Your Characters?
My characters are based on real life people I have met. Are they fictionalized?— YES! But I exaggerated them for emotion's sake.

The main character is very much my husband. He's serious, stern, loyal and honest. I fell in love so much with him, I wanted him as a character that everyone else could fall in love with. I adore him not only because of his strong points— but because of his flaws also…which you will read in the book. He's not the cheesy hero, nor the all-around good looking character…he grows on you because he isn't perfect, but yet his qualities are so very attractive he pulls you. You root for him and develop a care for him, and you watch him grow as a person.

Other characters are people that have inspired me over the course of my existence. They each offer individual and powerful aspects to the book. What I love most is…they are all accepted no matter their personality. Through the internet, a brief encounter at a store, a life-long friend or someone that has passed on— I have met the characters in my real life. They touched my heart in some manner and I wrote them in my story. It only takes a moment for someone to make a life long impression. You might never see that person again, but their impact on your soul will forever remain. That's who my characters are. They are real.

Book Sample
Random excerpt from chapter 33, just to get a feel for the writing style:

"…The ghostly forms emerged like a black fog drifting down the hill. Slowly, steadily with a certain sinister grace. As if on cue, the moon shone for a brief second through the snow clouds and returned to complete obscurity. Perhaps she curtained her beautiful face in sheer fear.
He stood fast in his stance, narrowing his eyes to make sense of the objects. He often wondered who or what the Draconics would look like. It was not a quick attack like he had anticipated, but a slow descent. Reed discerned hooded forms masked completely by their ebony robes. Like deciphering lyrics to a twisted lullaby, he became entranced.
In his mind, he heard a voice hiss his name…Reeeed. His body swayed, dancing with the wheeze…luring him into total mental paralysis.
Reeeed. The impending command beguiled him, drawing him closer and closer. Motion around him blurred as he connected with the darkness—darkness that had always dwelled in him. The good, common sense in him begged to move—to run. His heart screamed, leave—hurry! But his mind firmly voiced…no.
Worry vanished…pain lightened…his heart became a feather, drifting in the breeze.
From the far corner of his perception, Caspian pleaded to him. "Stryker!"
He was also mindful to protect Esmerelda and Kora. Yet, Reed stood still, diligently awaiting the enemies’ approach. Why fight it? Reed reasoned. The numbness he felt was almost—relaxing. Like giving in to death after so much physical pain.
Words floated in his mind: Pointless…useless…worthless.
“I am.” he whispered, his eyes fixed.
Submission is so easy, he reasoned. It’s carefree, worry-free, so easy…
He willingly closed his eyes as harmony with the enemy swelled his sensations. He opened one of his arms, welcoming the emotions.
The voiced beckoned, rewarding him for his obedience. “Yesss.” Reed’s eyes darkened into broad pools of freedom. The humanly emotions were…gone.
“Reed, please!” Boone yelled. Or is that Caspian…does it matter anyway? His scar tightened and he flinched. A waver in his captivation fuzzed, as the other hand grabbed his machete.
“You are not worthless to me. I can make you invincible, you need no weapon…” the voice assured.
Need no weapon…need no weapon, he thought. For a split second, he flashed back to Hamilton’s office. He heard his own voice in a muffled haze, but the words rang clear. I will fight for good, no matter what stands in the way…no matter who stands in the way. I chose to make the right choice, in every choice…and that’s what’s in here.
Reed splayed his hand over his heart. The steady beat pumped. Life, he had been given a second chance at life—
His eyes flew open. All repose melted into heaps of fury churning about his emotions. Blood boiled in the form of a powerful adrenaline. He lowered his hands and he tensed his biceps.
The voice hissed into obscurity, screaming and wailing until it diminished into silence…"

Links to Purchase eBooks – Click links for book samples and reviews
Buy Fyra: Welcome to the Mutiny On Amazon