You are here: Home / Non-fiction / Travel / From London To LA by Nick Brown 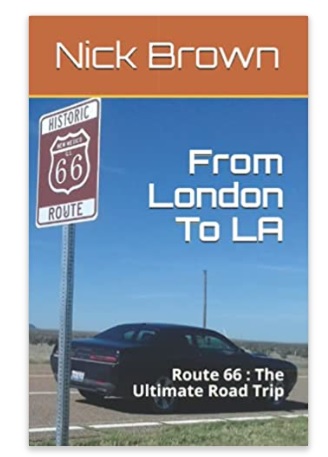 ‘From London To LA’ is much more than a travelogue. Not just a commentary of the journey itself, it also explores the history of places visited along the way as two blokes from London discover the big cities, the small towns, the real wild west and some really quite bizarre curios that couldn’t belong anywhere else other than along Route 66.

Full of information, observations and British humour, ‘From London To LA’ is a must-read for anyone interested in history, geography, Americana or just travelling in general and, of course, the Mother Road herself.

Or if you just want a jolly good read…!

What Inspired You to Write Your Book?
My own road trip. Route 66 is the most famous road in the world and contains all sorts of weird and wonderful attractions, as well as playing a large part in the history of building America.

Book Sample
We touched down at Chicago O’Hare International Airport at lunchtime, early one sunny May afternoon. Due to the time difference, our flight from London Heathrow had only taken two and a half hours, even though it had actually taken eight and a half hours.

Time differences always fascinate me. Concorde used to take an average of three and a half hours to get from London to New York. Three and a half hours! This means that passengers would have arrived two and a half hours before they had taken off. Actual time travel. But what about this to blow your mind… in 1996, the fastest ever trans-Atlantic flight was recorded when Concorde arrived in New York a mere two hours and fifty three minutes after leaving London. So, with the time difference taken into consideration, if you had stayed on that plane and it had immediately returned to London at the same speed, you would actually have arrived back 14 minutes before you took off on your outward flight. This means that when you touched down you would see the plane you were in across the runway waiting to take off and you might even see yourself boarding the plane!

But what would happen next? Would you be caught in a time-loop and live out the rest of eternity continuously flying across the pond, climbing down the steps of one plane and then climbing up the steps of another (the same) plane? Or would you carry on with your day as normal, meaning that there would, from then on, be two of you – one in London and one in New York? And what would happen if, at some point in the future, you actually met each other? Would it have caused a massive time paradox and started the universe folding in on itself?

I’m talking rubbish, of course, it would never happen, it’s an impossibility. Or is it…?

Anyway, returning to the matter at hand, we touched down at Chicago O’Hare International Airport at lunchtime, early one sunny May afternoon.

After collecting our baggage and successfully getting through customs, we headed out to the car rental company. I had booked an ‘intermediate’ vehicle for our journey. According to the advertising, an ‘intermediate’ vehicle is suitable for couples or families, providing comfortable rides no matter how long the journey. That’s ideal, then. Although we’re not a couple in the traditional sense, there were two of us so, technically, that is a ‘couple’. We were given a catalogue from which to choose our vehicle and flicked through the pages of decent family cars suitable for a nice run-around. There was nothing wrong with any of them, they were all cars perfectly capable of doing what we needed them to do, but we both knew what the other was thinking…
“Mate, we’re about to do Route 66, it’s the trip of a lifetime, I don’t really want to do it in a Peugeot 108.”
I have to say at this point that there is absolutely nothing wrong with a Peugeot 108, it is a perfectly good car to get you about town but getting about town we ain’t. A quick scan of some of the cars available – and it was a quick scan because we only turned a couple of pages before pointing and saying “that’s the one” – led us to a jet black Dodge Challenger. Now, I’m not really a car person. As long as it looks ok, works and gets me to where I want to go, the would generally that ticks my boxes. However, when we were taken outside to give the Dodge the once over, my immediate reaction was “oh yes, I could be seen in this!” Alex, on the other hand, is a car person and as soon as he saw it his grin was so wide it almost knocked his ears off. It was like someone had offered him the Batmobile for two weeks. Love at first sight.

We spend the weekend in Chicago before heading off on our voyage of discovery, so there was a bit of time to explore. Our first impression was that Chicago was a really nice place. Considering it is a big city, it didn’t really have that big city feel, like you’d get in somewhere like New York or London. It was a lot more ‘homely’.

Speaking of being homely, upon our meanderings we came across the Elephant And Castle pub. What? Why is this here? The Elephant And Castle is an area in south London, famous for its unusually brightly coloured shopping centre, its statue of an elephant with a castle on its back at the transport hub, and for being the birthplace of both Charlie Chaplin and Michael Cain. Obviously, we had to go in. The irony wasn’t lost on us. We’d flown 4,000 miles from London and had our first meal in a pub named after a place 60 miles from our doorstep.

Next morning, after breakfast, the time had arrived. We could travel from Chicago to Los Angeles using the interstate highways, but what is the point in that? We wanted to drive on Route 66 for every inch possible. As the highways were being built, more and more of the route was being decommissioned, but most of the road still remains. In 1985 the end finally came and the route as a whole received its decertification and US-66 officially ceased to exist. Bits of the 66 were actually overtaken by the new faster roads so for these parts we have no choice but to use them. Fortunately, though, these are few and far between, with the vast majority being as was. When not detouring off into towns of varying size, much of the longer stretches run parallel to the highways whilst other sections seem to be in the middle of nowhere.

US Route 66 was one of the original highways when the US Highway System was inaugurated (but more about that a little later). It was established in 1926, running through eight states – Illinois, Missouri, Kansas (albeit it for only 13 miles), Oklahoma, Texas, New Mexico, Arizona and California. After the advent of the big interstate highways, though, the road was removed from the US Highway System but the mystique lives on.

Route 66 is all about the history and – and I hate myself for daring to utter such a cliché – its all about the journey rather than the destination. Every day, every few hours, you are at a completely different place to the one you’ve just left. Big cities, little towns, interesting and important places historically, crazy places that make you wonder what goes through some people’s mind, ghost towns … they’re all here along the route. Throw some quirky roadside attractions into the mix and what’s not to love? Or at least to experience?

So then, here we go. The ‘Route 66 Begin’ sign, and therefore the start of our journey, is on the corner of South Michigan Avenue and East Adams Street, just across the way from Grant Park on the shores of Lake Michigan. Full of excitement for the adventure that lay ahead, we took the statutory photo by the marker, jumped into our hired Dodge Challenger (did I mention that?) and embarked on the 200 or so mile stretch to Springfield, our first overnight stop.
The two intrepid explorers set off. The valiant and heroic pioneers from a foreign land commenced their voyage of discovery into territory hitherto unexplored, at least by them, not knowing what would await them on their epic expedition. We pulled away along East Adams Street, traversed the intersections with South Wabash Avenue and South State Street and turned left into South Clark Street. It was at this point, after driving for very nearly half a mile, that we realized we’d taken the wrong turn.
Well, this bodes well, doesn’t it!? So back to the start we go. At this rate we’ll barely have left Illinois before our return flight leaves, let alone traverse almost two and a half thousand miles across the third biggest country on Earth…!