You are here: Home / Fiction / Women's Fiction / Free to Be Tegan by Mary Grand 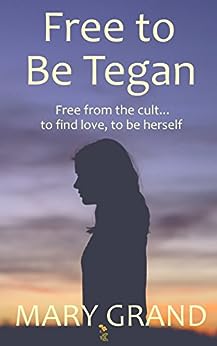 ‘You are dead to us.’
Tegan’s expulsion from the destructive cult is brutal. Free to Be Tegan tells the story of Tegan’s struggle to heal from past trauma and live a full life in the modern world.
On March 1st 2006, Tegan, aged twenty seven, is cast out from the London-based ‘Last Week Community.’ The cult leader, Daniel, uses fear and isolation to control his followers. Tegan is unprepared for the world into which she is thrown and which she has been taught is evil.
Tegan journeys to the wild Cambrian Mountains and meets her aunt, Hannah, married to Ellis, and their daughter Cerys. She stays in their cottage, ’Hafan’, which is cosy but disturbingly familiar.
Gradually Tegan becomes aware of the disparity between her past and present lives. Her dowdy clothes and headscarf, her fear of the pub, TV, and unfamiliarity with the complexity of modern relationships set her apart.
Fortunately Tegan is befriended by Cerys and some people in the village.She is also attracted to local vet Sam, who shares her newly-discovered love of the hills. However he is engaged to glamorous Angharad and the relationship is fraught with difficulties.
Tegan has hidden scars, and secretly battles with harrowing nightmares, panic attacks, and flashbacks. She reluctantly sees a psychotherapist and starts to understand the trauma from her past. However, bottled-up resentment and anger surface in a short but eventful rebellion.
Tegan has the courage and will to survive, and slowly starts to build a new life.
The wild beauty of the hills, the people she meets and the secrets slowly revealed by the cottage all provide an intriguing backdrop to Tegan’s drama.
The novel is set in spring, a story of hope, new growth, of the discovery of self and the joy of living.

What Inspired You to Write Your Book?
I was originally inspired to write Free to Be Tegan by my upbringing in a psychologically abusive High Control Group. I wanted to write about how damaging such groups are and about a path of recovery , I chose to use a fictitious cult and setting partly in order to make the novel as accessable and reach as wide an audience as possible . I visited the stunning Cambrian Mountains and knew I had found the perfect setting. It is a wild,beautiful and healing place.

How Did You Come up With Your Characters?
The central character Tegan is based on some personal attributes, a number of young women I knew growing up in the sect and is also affected by PTSD . Her mother, Sarah, has characteristics of a number of older women I met. The charater of Daniel, the cult leader, was based on a lot of research into the characteristics commonly found in cult leaders and then developed, I hope, into a rounded, ‘real’ person. Ellis has great charm as well as weaknesses and reminded me of so many men I knew in Wales. One of my favourite characters is Cerys. She is one of those kind, giving people, we all know and can be underestimated and undervalued. It was important to me that she had a fully developed story line.

Buy Free to Be Tegan On Amazon