You are here: Home / Fiction / Fantasy / Found by Ashley Hohenstein 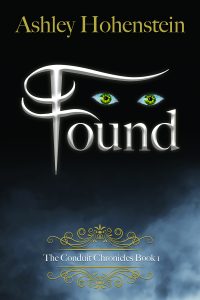 Ophelia Banner has a thriving psychology practice in San Francisco California. Life is normal or at least tolerable, most days. The problem is that Ophelia isn’t normal, she never has been. She’s been plagued with her curse, as she fondly refers to it, since she could remember. A cruel joke bestowed upon her since birth that enables her to absorb and compel people to share their inner most feelings and secrets. At least it made her a hell of a therapist.
In a fated moment everything about Ophelia’s life will change after an encounter with a golden-eyed stranger. She is thrust into a world where historical heroes, Gods and monsters alike are no longer just legends or the contents of nightmares—but frightfully real.
Ophelia doesn’t have much time to conform to this new world and the cast of characters that inhabit it because a war is being waged, and has been fought in the shadows of humankind for over three thousand years. No less vexing is the war going on in Ophelia’s heart, torn between destiny and her desire to control her fate—consequently her heart.
As conflicts ensue one thing becomes abundantly clear. Ophelia’s curse will either be the weapon that turns the tide in this war—or— may very well lead to the annihilation of our world as we know it.

Found is the first book in The Conduit Chronicles series that follows Ophelia along her journey and exploration of this new and provocative world.

What Inspired You to Write Your Book?
I was always writing, even at a very young age. I found myself lost in my imagination and the fantastical worlds I would dream up. Don't judge my mother but one of my favorite books at age nine was Interview with the Vampire. Consequently, immortality was absolutely mezmerizing to me. So I started letting my day dreams run wild with a cast of my own immortal characters. The conduit world came into clear focus when I was 25 and backpacking through Europe. Suddenly my brain was teased with historical places, along with the extraordinarily gifted people I had been imagining for years. The two fascinations melded together to create The Conduit Chronicles. After three months of journaling on trains I had the story completely mapped out and the rest is history.

How Did You Come up With Your Characters?
Ophelia is a strong, independent woman but her strengths are often her weakness. Lucas is arrogant and bold, along with being witty and cunning. I wanted him to lighten the mood at times and create the tension during other moments. He is mysterious and strong. Elias attempts to be the level headed one of the three. He puts others first and see's the bigger picture when most cannot. I think my characters are a reflection of the world I see around me and in myself and I believe readers will feel the same.